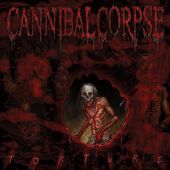 Chunky, thick and well-orchestrated annihilation frenzy of fantastic guitar-work in play here. The vocals go well with the music and what an array of riffs that Pat and Rob came up with on here. Totally killer music, death metal at its finest. One of their best releases to date to me. Fast riffs and some just so slow and thick that they simply slay. Longer album for these guys, about 44 minutes of simply well put death metal concoction. Really unique guitar-work, they got super-creative on here. It is just really blasting on here in terms of the guitar. That's what made this album an over-the-top creative execution. Corpsegrinder is mostly deep-throat on this one. But it fits so well with the guitars.

What differentiates this album from their others is their creativity and experimentation regarding their chunk style of musical "torture." They change it up all the time though and the leads are better on here (sad to say better than when Owen was with the band) and they play around with their sound regarding how they put together their music. You get slow, medium and fast essence of yes, all the above on here. They really have deepened into the riffing wide arrange of experimenting with all different things. I mean the guitars have and array of bar chords, heavily palm muted speed picking licks then just flat out crunch tone down picked riffing which makes this one so likeable. A real wide experimentation.

Corpsegrinder focuses on the deep/end of throat which makes the album sound just brutal. He doesn't go balls out with a lot of screaming. He mostly feeds into the thick core of the sound here. He does go a little high-end, but not a whole lot really. This Cannibal Corpse release I actually like better than their 2014 one because of the music and the production. Really good production here because you can hear it all. Everything is well mixed, and it does the album great justice. Not a lick on here that either guitarist does wrong on. It is precision death metal from beginning to the end. A ruthless array of abomination. Never been a fan of their lyrical choice, but the music just kills!

So what you can expect here is just riffs thrown at you that are creative, solos that are way technical digging deep into the fretboard, drums that go right in hand with their riffing, vocals that are deep and from beginning to end, expect no boredom whatsoever. In past releases, a lot of their music doesn't really progress, I'm blaming that on Owen, I'm just saying that their guitar combination nowadays is more solid and creative. It really comes down to: what Cannibal Corpse album is their best? Well, reflection on past and present, they really have come a long way. I'll admit that Butchered At Birth is one of my favorites, but now, Torture is up there too! Different lineup back then though.

Well, all in all, this was a highly gifted Cannibal Corpse release. They cover diversity meaning their sound changes (there's even clean-tone guitar on here) and their brutality is top notch. It slays the whole way through. Not a song on here that I dislike. I'm saying that all of their work here fit together for one awesome release. One thing that they could've done a little more with are the vocal ranges. I know that they were probably focusing on making this just balls out brutal, so that's why you don't hear Corpsegrinder screaming as much. That doesn't take away from the quality of the album. It doesn't make it stale at all, it makes just flat out HEAVY. Get this one ASAP! It rips the speakers!