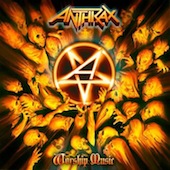 This one reminds me a lot of the older days when the band put out Persistence of Time and State of Euphoria. There's still that tint of thrash metal to the core of their sound, but now with more groove along with it. Joey still sounds the same on vocals and the guitars throw out some strong rhythms/leads. I'd say the blend of thrash/groove metal definitely does apply. Great album here, this one you can't really get tired of. The band has been around for so long and pretty much (for the most part) have the same line-up they've had for years. What's most striking here is the music and vocals. Joey sings great on here and the guitars have some awesome riffs! You have to hear it!

Does this album go along well the whole way through? My answer is yes, it never gets boring. What's different? The ingenuity in the songwriting flat-out, the musical compositions are strong on every song and that groove is thick, not just thrash metal. It's not a musically fast album though the leads are. They are quite technical, the main guitar riffs are solid, going on strong for every track. They mix exquisitely with the vocals as do the drums. It sounds like they tune down a little bit, making the music a little heavier then mix in that groove laden style in there. The bar chords and tremolo picked riffs are all quite well played and thought out. Very good songwriting!

What's to be expected in the production quality is the fact that the guitars are well heard, vocals don't drown out the music, drums are well heard on here too, so overall a solid album sound-wise. Nothing really very wrong about how this album sounds production-quality speaking, I think it's really solid. The guitars hit home with me on here. They really did a good job at piecing everything together. You don't just hear groove guitar, you hear quality in some of its' thrash-stricken style, but it isn't an album that's really overly aggressive. Now that they've turned on the groove to their sound, they've made their metal sound quote like that to the likes of Soulfly's 'Savages' release.

Their clean sounding music isn't for the whole of the album. It's just a part of their diversity. It really is an overall album that is something that any metalhead could get into because the music is so well pieced together. It fluctuates, but not in severity. It's really a mild metal album. Some darn good lead work as well! i think Joey sounds awesome as usual on here. His voice makes Anthrax unique in the metal community. It's what sets them aside from bands like Exodus, Slayer, Testament etc. Even though their aggression isn't as prominent than is on their earlier days, they are still making quality metal. This one is probably one of their better ones in their discography.

Still skeptical? Well you shouldn't be because Worship Music hits home with each and every track. They dig deep in creativity and hit home with all outputs. Don't expect anything extremely fast or thrash laden. Even though the crunch tone on the guitar is still there, the intensity has backed down and they're playing more groove than thrash. The thrash elements are still apart of this album, but the music aims more at a groove to it. It really is diverse. If you haven't liked more recent Anthrax releases, this one you'd be surprised that you'll like and is well better than just an average metal release. These guys are still going on strong! They own!