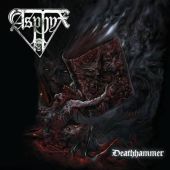 No intro, no warning, no warm-up: just like the first song of the previous album, the explosive opener "Into the Timewaste" unleashes a violent storm in a matter of seconds. Asphyx open up Pandora's box of death and doom metal, but this time every kind of evil, sickness and death are highly welcome. The band makes no compromises in terms of brutality, precision and style. Any form of external influence does not show up, the deathhammer meets the doom anvil and that's it. Usually, the anvil is stronger than any blow of the hammer. Nevertheless, with regard to the here reviewed album, I prefer the death metal facet of the band - and rest assured, the deadly outbursts of anger are as heavy as the doom tracks. Moreover, they are simply better.

The short title track distinguishes itself in view of its irresistible flow, the rasping riffing and the catchy chorus with the galloping double bass. It is the prime example of the fast-paced tunes, because it bundles all their strengths. This means that fury and directness, belligerence and compactness meet on an equal footing. The campaign against softness, flabbiness and fickleness takes its course and the well-oiled machinery of Asphyx is never in danger to begin to stutter. This applies at least for those tracks that avoid any form of quantitative excessiveness. Unlike the common visitors of Wacken who stumble across the fields in their oversized and multicolored costumes, songs like "The Flood" or "Vespa Crabro" do not suffer from the smallest iota of fat. They occupy the territory where murder is precisely executed and despotism reigns. And there can be no doubt that van Drunen is the voice of the dictatorship. But this is the first undemocratic regency whose propaganda does not exclusively deliver good (but mostly untrue) news for its people. Quite the opposite, van Drunen announces only horrible (but mostly true) messages. For example, he sings about the reign of terror that took place in France in 1794. History is always a good inspiration for suitable metal lyrics and here they ennoble the swift and handy "Of Days When Blades Turned Blunt". But I admit that the similarly designed "Reign of the Brute" works excellently as well, although its apocalyptic lyrics have no concrete connection to reality.

The doom songs do not fully convince me. They fail to develop the profound degree of intransigence that a strong doom number of needs, at least in my humble opinion. Yet there is an exception: the closer shows the brilliant combination of a strong riff and a slowly but steadily growing and intensifying song pattern. The song unites stoic guitar work with almost lethargic drumming, but the result speaks for itself.

I don't want to conceal the fact that the second CD of the media book edition is not essential. "Der Landser", equipped with German lyrics, is as unspectacular as its English original. I appreciate the fact that Asphyx offer a song in my native language, but from an objective point of view, this version does not contribute to the positive overall impression of the product. Only French guys, who intend to learn German by reading metal lyrics, will enjoy this song, but I don't think that there exist a lot of people in and around Paris who intend to do such a crude thing. (I admit that I wanted to refresh my miserable French language skills by studying the lyrical content of Forteresse's last album: complete failure!) The further content consists of alternative recordings of two album tracks and cover songs of Celtic Frost (naturally totally morbid, but not very exciting) and Majesty (furious). All in all, this bonus CD is a rather slack extra. But the regular album clocks in at 47 minutes, so there is no need for a huge additional section.

However, my conclusion relates first and foremost to the regular album. Due to the fact that the rabid, compressed speed songs gain the upper hand, the flawlessly produced Deathhammer is the first among equals, one step ahead of its predecessor and its successor. Highlights? I recommend all tracks of the regular edition that do not surpass the four minutes mark and "As the Magma Mammoth Rises".

The new Asphyx is a nice tribute to older Death Metal and it shows no ideals of treading into any territories other than those that are crushing, punishing and tightly structured. There’s nothing technical to be found on this album, so people that appreciate the classics will be the most appreciative of what’s on offer here.

The band that this is mostly similar to is Obituary, which has a very similar Doomy, Sludgy feel to their songs. Also, the vocalist Martin Van Drunen showcases a tone that is deep and grimy in the same manner as John Tardy. The best part of this album are the definitely the riffs, however, which are huge and enveloping. There are parts that are bit doomier and recall the likes of Celtic Frost as well. The earlier portions of the album are some of the best to be found, with the opener 'Into The Timewastes' setting a nice precedent for things to come. The ending portions of the album are very strong as well, with the closing track 'As The Magma Mammoth Rises', showing a very similar epic feel to what a band like Immortal displays and thus is perhaps slightly different in that nature than the remainder of the tracks. The tracks here are all very solidly in the classic mould, but those that are looking for something a little more innovative or forward thinking might be left wanting. This is almost the exact opposite from what we might expect from a band like Cynic, for example.

There’s nothing but solid, punishing Death Metal that is very well-written, but by no means adventurous. Fans of the first couple of Obituary albums in particular will find something to like with "Deathhammer".