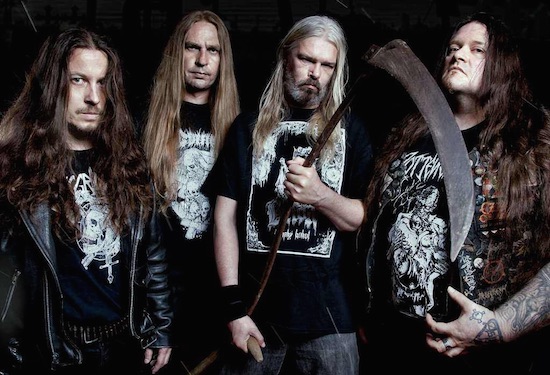 Dutch doom/death metal division ASPHYX continue to promote their much acclaimed latest album, Incoming Death, which was released at the end of September via the band's longtime label partner Century Media Records.

Therefore, ASPHYX are now launching a a new music video for the album's merciless opening track 'Candiru'. The clip was shot during the band's recent appearance at Turock Open Air festival in Essen, Germany and was edited by Maurice Swinkels / Younique Film (Exodus, Kataklysm, etc.), who most recently worked with ASPHYX on the 'Forerunners Of The Apocalypse' clip.

ASPHYX vocalist Martin van Drunen checked in with the following comment about 'Candiru': "Candiru is a no-nonsense, non-compromising 3 riff containing fast Asphyx Death Metal track. A gory story about a revolting little fish from the Amazon that can nest itself in human genitals to suck blood after it got there via the urine stream. Only removable through amputation, so be careful there were you relieve yourselves folks! The video was recorded at this year's Turock Open Air in Essen Germany, which we can almost call our second home. The very first time we ever rammed that tune on stage. We had a ball, as always, so hope you do too while watching this".