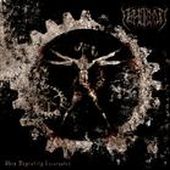 Death Metal is filled with great bands who have kept the movement going, but also has many fly-by-night clone bands that seem to not want to be good nor have talent to be original in any way. With all of that going on, it is refreshing to finally hear one band that does do Death Metal very well, and also brings new life into it.

Finnish born four piece Abhordium is a band that the Death Metal scene has needed for a long time now. Playing what can be best described as old school blood and gore Death Metal modernized with shades of both Black and Speed metal elements added in. The result is a band that is a Death renaissance all by themselves, with scalpel sharp riffing and a mile high wall of heaviness that moves and devours anything in its path, they seem to define their own take on the genre and advance it ten fold.

With nine very tight, brutally solid tracks that live here on this disk, it is a death metallers delight that is nearly flawless in every way, expressing every violent fantasy anyone has had. My favorite two songs have to be 'Dormant Mind' and 'Plague Upon Plague'. Songs that perfectly show that up to date Old School DM sound that is delivered by intensely good musicians and singers that have shown what Death can be.

Everything from the impressive musicianship that moves the music along down to the purposely done rough production is what makes Abhordium absolutely a force to be reckoned with. It is shockingly gory, blood splattered and meticulously devious music that seems to stand alone, and stands victorious in the DM wars. A surprising album, from the crowded world of Death Metal.