After writing the review for the album I couldn’t possibly stay away from Omega Prayer and Abhordium. I’ve been going back to the album quite often, so when the opportunity presented itself and there was a chance to do an interview, I just went for it. Arttu Aalto (drums) was nice enough and agreed to answer my questions - so click on the video to listen to the tracks and get to reading. 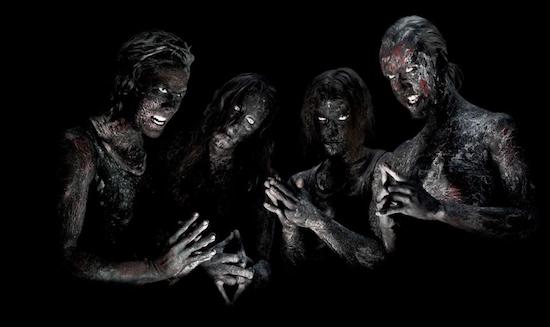 Thank you for finding time to this interview, how cold is Finland this time of the year?

Hi! It has been pretty cold last few weeks. Around -10 to -20 degrees Celsius. It's still nothing compared to what it used to be 15-20 years ago. You can clearly see that the climate is changing. It's usually rainy and slushy weather from late autumn to late spring nowadays, at least here in Southern Finland.

Quite different from temperatures in Florida [laughs] How is Abhordium nowadays?

New material in the works already!! Keeping busy aren't you? Here is one that you probably hate already [laughs] how would you define the meaning of the word Abhordium?

It is meant to describe a feeling of extreme abhorrence. The conflicts of views, beliefs and values tend to induce hatred and abhorrence in people - and when taken to extreme proportions, it can drive them to atrocities. So in a way it also represents the destructive power of man.

Some time has passed since the release of the album Omega Prayer, and from what I can see on the net the word is good. How does it feel to know you did well?

It feels good of course. There were many issues during the years which delayed the release of the album, but we're glad it's finally out so we can concentrate on new material and playing gigs.

Album sounds and looks really good, so congrats on a job well done. Do you guys work on everything together?

Thanks! Yes we try to work together as much as we can. I live in Paimio nowadays, which is a small town about 20km from Salo, so the arranging of practice time and other sessions concerning the band has become a little bit harder.

New album has been out for more than two months now, what are the best things you've heard about the album, how about the funniest?

The most satisfying thing is to hear that people like the songs, the sound and the atmosphere on the album, because everything except the cover art and, of course, the pressing of the album was done by ourselves, so it's nice to hear this kind of feedback and appreciation of our art. Maybe the funniest in my opinion was this one short review that described our music as boring standard death metal hah! Negative and constructive criticism is of course always welcome, but that review was just really crappy. Well, we do not expect everyone to like our music.

What is Omega Prayer?

The album has visions of the end of our civilization by the actions of man, so it is the last prayer of a man when he faces his ruin and realizes that he has caused his own perdition. In the title track there are also aspects of the natural side of change and renewal through destruction. So, omega prayer can also be seen as a wish for the powers of nature to exterminate human race.

Most of you play in other bands so I was wondering how you handle working on new songs. Is there a decision maker/leader/tyrant that picks and chooses, or is everything being agreed on?

Like I said in the earlier question, we try to work together as much as possible, but I've been taking more responsibility on making new material, since Jarkko left the band, but all of us try to generate new ideas and then write them down or record them, and after that we try to refine them together.

Since everything is handled by all of you in Abhordium; who is responsible for what, how do you divide all the responsibilities?

We try to divide the responsibilities, but there have been certain roles that some of the members have taken. Kari and Henry has handled the business side, promotion and arranging gigs and me, Tommi and Markus have been focusing on making new material and taking care of the social media, and some of the promotion also.

With everything being taken care of how are you still not signed to a label? Are all the offers really that weak?

We are still currently looking for labels that would be interested in our material. We've received a few offers, but most of them have been either too expensive or we saw that they could not offer enough efficiency for the band, because we know the cost of pressing the album and the other production concerning it. So once again, we decided to release the album by ourselves.

Is that the reason for such a long break between the releases?

Yes, this is one of the reasons, but like I said earlier there were also other issues concerning the release of this album. From financial problems to other hardships in personal lives and also losing our rehearsal place, but still we managed to release it and the good feedback has motivated us to make new material.

You just unleashed two live videos, but only one is for a song from the new album. Was there any particular reason for such choice?

Those were the songs that went well and had the best looking material from that gig and of course the editing costs so these were the main reasons we chose these two songs.

Why did you choose to record that day and what other songs have been recorded, are we gonna see more videos coming out?

Because we had the equipment for recording that day as it was planned earlier that it would be nice to have a few live videos from that gig. The whole gig was recorded, but for me that wasn't the best performance, because the night before this gig we played in Helsinki, and I had a little fever. Luckily, I felt a little bit better on the next day. This was the first time that I've been sick on a gig and it fucking sucked to play those blast beats. It wasn't the wisest choice to play but at least now I know my limits. Yes we have been planning to record new live videos, because they are a good material for promotion.

From this album they would be 'Asebeia', 'At The Highest Temple' and 'Perpetual Desertification'. We've noticed that these songs have received the best feedback from the listeners/audience. I think it's the groove, the atmosphere and the crushing riffs in these songs that make most of the people like them and because of this we like to play them live.

While on the subject, will you follow the release of the new album with some touring; are there shows on the agenda yet, and most importantly - any USA dates?

We have only few gigs here in Finland, but we've been in touch with a foreign booking agency, however we haven't come to any conclusion yet. We are currently searching for more possibilities to play in foreign countries and we would certainly like to perform in USA some day. We hope that it will be possible in the near future.

I don't know about the other guys but I usually watch movies, listen to some music or take a long walk in the forest with my dogs.

Any Finnish bands that you have been listening to lately?

Are you a vinyl collector or more of a CD guy? Which one do you buy?

I've been collecting CDs but I don't have many, around 200 or something, mostly from the artists that I've been listening to for a long time. Of course I would like to have more and it would be also cool to own a vinyl collection one day.

Thanks for your time. Last line is yours.

Thank you for this interview and thanks to all of those who have supported us during the years!