Chaos Manifesto is the name of the newest album of Demonical. If you haven’t heard it yet make sure that it will happen soon, because this is the album that is not to be missed. I had a chance to ask few questions, and Martin Schulman (bass) found some time to get us in on what is going on currently, what was going on previously, what will be happening. You get the jist. Read on. 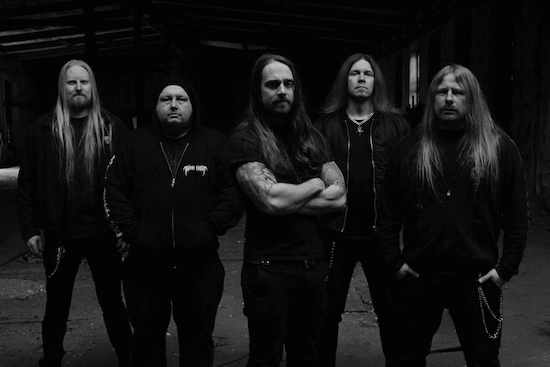 I want to congratulate you on the job well done with the new album, it kicks serious ass - time and time again!! How is Demonical doing freshly after recording of the album and right before release?

Thank you, cool that you like the album. We are doing fine and rehearsing for the upcoming shows and festivals. We haven't played live since last summer as we have been working on the album so it feels great to return to the stages with new killer material.

It's been five years since the release of Darkness Unbound; so far the longest gap between the albums. Why so long, what was going on, what was happening?

Chaos Manifesto, the new chapter in Demonical saga, will see the light of the day this month. First song 'Towards Greater Gods' is out already and it’s a beast, what can metalheads expect from the rest of new album?

Fans can expect a solid but varied album full of Swedish death metal darkness! There are some differences between the tracks which keep the album interesting; it's not like listening to the same track over and over again for 40 minutes.

Are you preparing anything special for the big date; will there be a video for any of the new songs?

Two tracks/singles have already been released and there is a third one coming before the album is out. We will headline the Braincrusher Fest in Germany on Friday 23 March, the album release-date, so that can be seen as some kind of release show.

New album cover is stylistically close to what Demonical was doing previously (maybe except Death Infernal). Is there a main idea behind the art direction if it comes to album covers, can you tell me more about the process? How do you make your decisions when choosing the cover for a new album?

We always try to find artworks that represent the band and give a hint what the album is all about. I personally hate these standard Photoshop covers; I want more old-school drawings or paintings that are made by someone who is really an "artist", not just anyone who is able to use a computer program. I do also prefer to buy an existing artwork from an artist so I can see it beforehand how it looks instead of telling someone to do something as then there is a risk that it doesn't turn out the way you have hoped or wished.

There are some new faces in the band. Line up in Demonical seems to be ever-changing. Can you please tell us more about the reasons for those changes, and maybe introduce the new guys.

I wouldn't really call it ever-changing, but, as with all bands, we do also have line-up changes - and now it has happened that we have had a few during the last years. We haven't kicked anyone out from the band except the latest vocalist, all other previous members have quit mainly because they have found other things that they consider more interesting than playing in Demonical. Line-up changes can be hard and irritating, but as long as you find better and more dedicated members than the one who left, things are ok. The current line-up is very solid and I hope and believe it will stay this way now.

Pehr Skjoldhammer of Alfahanne appears as a guest vocalist on the new album. How did that collaboration come to life?

Already a few years ago we decided that we want a track with Swedish lyrics for the next album, and when I had written the music for 'Välkommen Undergång' I realized "this is it, this is the track that should have those lyrics". But I knew also that none of us is not going to write those lyrics; instead we knew that Pehr should do it as he is a master of that kind of Swedish poetry. So we asked him and he agreed, being a good friend of us of course helped I think. When he had written the lyrics we quite naturally came up with the idea to have him do some guest vocals on the track, and I think the result became really great. Again, this was some new territory for Demonical but we explored it well.

What was the most important element when you worked on new songs? Do you work collectively on the new material?

I wrote the music to eight of the nine tracks we recorded but then we worked together on some arrangements and all details. So in a way it was a collective work and the result wouldn't have turned out this good without the involvement of the entire band. The process is that I write at home and then I rehearse first with the drummer to get all drum stuff finished, then we rehearse with the whole band and make changes and adjustments if needed. After that, we record a rough demo of the track so that Alex can work on the lyrics and make a pre-production recording.

New album is a definite Demonical, but I was wondering about the creation process. Was it easy and natural, did everything go as planned?

Yes it went rather easy and I had a good flow with ideas when I wrote the music. I try not to limit myself too much when writing, I know what suits Demonical and how the stuff should sound, but I’m open to influences and ideas from other kinds of metal as well, and not only death metal.

I think, and I hope that you'll agree, that every Demonical album is a step forward in development for the band. What do you think you have made better this time around, how does the new album progress the band in your opinion?

Yes, I think this album is a good step forward and one of the reasons for this is the new line-up and the dedication everyone has put into the recording and band in general. We made also a proper pre-production recording this time, this was also something new for us, so we got a better picture of how the album will sound, and we were also able to make some changes before we started with the actual recording. So all in all, there are several reasons why this album is clearly our strongest effort so far!

I've never had the chance to see you live, so let me ask you this: what are the three songs that you "just have to play" at every show?

There are a few tracks from each album that people want to hear, for example 'Death Metal Darkness' from our second album Hellsworn and 'March for Victory' from Death Infernal. So we try always to have interesting set lists containing both golden classics and newer stuff.

Since we are on the subject, will you follow the release of the new album with some touring; are there shows on the agenda yet, any USA dates?

We have quite a lot European shows and festivals coming up this spring and summer and then we will see if there will be some real tour in the fall. We have played the US a couple of times, at Maryland Deathfest, and it would be cool to come over for some proper touring, but of course everything depends on the logistical and economical factors. But let's hope something will happen later this year or during next.

You've been with Cyclone Empire since the beginning I think but new album comes out through Agonia Records - what was the reason for the change?

We left Cyclone Empire already in 2014 when we had fulfilled our old contract, as we weren't really happy with the label and how things turned out. So we checked with other labels and got a bunch of offers, Agonia had the best one and they seemed genuinely interested in the band - so we signed with them. The 2015 MCD Black Flesh Redemption was our first release through Agonia but yeah, this is our first full-length through them.

There used to be some kick ass cover songs on Demonical albums in the past but there are none on anything newer. Why did you decide to drop that idea?

We have felt that our own material is strong enough so there is no need for any cover songs. Of course it would have been cool to record some cover tunes for upcoming "B-sides" so to speak, but we haven't really found any good tracks that are interesting and that we feel we can give justice to. Better to concentrate on our own material and make that as strong as ever possible. There are too many bands recording covers just for the sake of it, I mean how fucking exciting is it with a lousy death metal band doing an Iron Maiden cover with cookie monster vocals that sounds like shit?

When I visited your website, I noticed a link to Killer Vodka in the menu. Not much else can be found when you click on the link though, what gives?

Well our website is not really up-to-date anymore, there will be a new site online any day now, but the Killer Vodka is a German brand we had a small sponsor deal with. Or maybe we still have, I haven't been in touch with them for a while hehe.... Well we got some free vodka bottles every time we were in Germany so that was a nice deal [laughs].

Thanks for your time. Last line is yours.

Thanks for your support, much appreciated! Keep the flame burning!