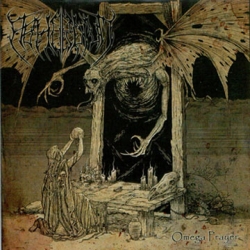 To come up with an album in death metal that is interesting and original enough to have metalheads talk about it is not an easy thing nowadays. Metal genre is saturated with so much material, that huge percentage of it simply goes unnoticed and unappreciated. Some deserve it, that is a fact, but there is much more that can surprise the listener in many ways, bring something new to the table and at the end move death metal another step forward. Abhordium is one of the latter and their new album has been a reason for my devilish smirk since the day it came in some time ago.

To be honest with you, I did not expect Abhordium to even be death metal when I got this CD in my hands. Not knowing the band’s previous material and prejudicially judging by the cover of the album and band logo, I thought that this is going to be a pvre and kvlt black metal album. Wrong, wrong, wrong!!! Abhordium maliciously punishes its listeners with fast, brutal, chaotic and very technical death metal with darkened and sinister black metal melodies. Well-executed and well-recorded material brings 9 cuts of unforgiving and relentless metal that comes battering down like a speeding semi going downhill with a plow on its front and nothing but rotting flesh ahead. Guitar riffing presented upfront and melodies they smuggle in the background are strong and razor sharp, and should satisfy most metal fans out there. Add maniacal beating that drums are generating here, fat rumble of the bass and vocals ranging from screams and growling to black metal shrieks (with some clean vocal spoken passages here and there), and you better hold on to your seat. This is a complete product, a blackened death metal of the highest caliber. Most of the songs charge forward with blistering speed and mean conduct, making this album an absolute force – but, let’s not forget, that all that deathly insanity is enveloped in a juicy and selective sound that guarantees all sections of your speakers to get a good workout. Sounds like something that you might enjoy? You bet it is!!!

Abhordiums Omega Prayer is a very satisfying slab of musical brutality and chaotic madness, and I can recommend it to anyone that is into blackened death metal that is well executed, recorded and produced. I’ve enjoyed it quite immensely over the last couple days, and even though it is time to move on, I already know that I will come back to that one again and again, and a few more times after that.