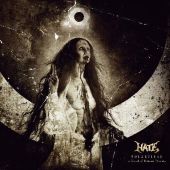 Hate has been on my shelf with the best Death Metal since their "Anaclasis" album. All 3 albums recorded since 2005 are my all-time favourites and I was really anticipating the next album and here it is.

Finally I could hear sounds from "Solarflesh" and it's getting better each time I listen to it. All things you can expect - powerful growling by ATF, one-string riffs, chord riffs and solos by Destroyer, low, distorted bass by Mortifier and excellent drumwork by Hexen. And all blended together in another perfect Hate album. There is nothing missing from what I liked about last 3 albums, there are few more interesting elements, some tribal drums, some acoustic guitar, some folk elements and everything fits their style perfectly. The band is still developing, each new album is a masterpiece better than the previous, even when I thought it was not possible.

The album starts with interesting intro, the band, trying again to explore more styles, have invited Androniki Skoula (known for collaborations with Septicflesh and Rotting Christ) which definitely worked out well. It added more pagan atmosphere to the whole album. Slow tempo for the whole intro is followed by the first track 'Eternal Might' - my favourite fast-paced bass drums are there since 8th second and after about 1m40s of "warm-up" all hell breaks loose. Amazing work of all musicians is supported by ambient sounds in the background, which only make the darkness more deep and it seems to me that the band has an amazing sense of where to put them to strengthen the brutality. 'Alchemy Of Blood' - amazing solos, ATF's screaming sounds more powerful here, a lot of blast-beats, very aggressive track. 'Timeless Kingdom' - more complex rhythmically track, often changing tempo, guitar melody lines are inspired more by Greek/Far-Eastern culture here. 'Festival Of Slaves' - brilliant track with short intro with tribal chanting, great atmosphere with background sounds adding a lot of depth and few sudden sounds of clashing blades and occasional tribal drums. 'Sadness Will Last Forever' - beginning with ambient sounds followed by slightly slower entrance, which after 2 minutes changes into mid-paced, good track for headbanging, I guess this will be one of the greatest tracks for concerts (try not to scream "In the name of the Antichrist", I dare you). Obviously my favourite live track is still 'Resurrection Machine', but this one would be probably the second choice. 'Solarflesh' - begins with classic guitar, latino-style, just to develop into another fast, blast-beats-filled missile right in your both ears. 'Endless Purity' - this is most probably a track which ATF had in mind saying that this album will have some groovy, trance-like tracks. Reminds me a little of 'Fountains Of Blood...' ending and has very atmospheric, haunting passages. Heavy, crushing track. 'Mesmerized' - another track where we can enjoy Androniki's voice, amazing track to close the album, her voice in the background during the chorus is a great addition.

This time the album was only mixed at Hertz Studio, recording took place at Sound Division Studio. And I can hear that it helped a lot to reach much more deep sound and all added background sounds make it a perfect follow-up to "Erebos". Definitely a must-have album for your Death Metal collection. And a perfect 10 for me.