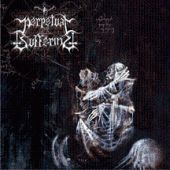 Black Metal... that conjures up all sorts of thoughts and feelings into one darkened force for me. I remember hearing the likes of Venom and Bathory back in the day, and loving every blasphemous moment of it. We have American induction into the Black Metal pool... Long Island’s Perpetual Suffering.

In 2002, this band of two main members invited people and emerged onto the scene to brew some American Black Metal. Raw and caustic, they released a cacophony of malevolent noise. Sounding like a stripped down and roughed up version of very early Bathory (hard to conceive, hu?) they released one of the most basic sounding metallic explosion since Hellhammer released "Apocalyptic Raids" that yet wants to be brutality like God Seed. Does Perpetual Suffering album stack up... that is the question here.

Out of the eleven tracks here on their album, the rawness and flat tonality seems to overtake each track , and not in a good way. Having some of the sloppiest BM riffing which seems to be almost amateurish, not to mention, mono-beat drumming and not to mention the worst recording values ever in the history of music - this album would make Satan rise from Hell itself to do one thing: kill these False Black Metallists many times over.

I thought hard on how to sum this review up with pure honesty, and have to go with my straight to the fucking point style. Go buy the new God Seed or try to get any of the older Bathory albums if it is still available and you don’t have any and do yourself a favour and forget that Perpetual Suffering ever existed. Strong words... yes... totally the truth... Fuck Yeah!!

I love raw Black Metal but there is a basic standard that has been there always, and Perpetual Suffering never gets even near close on this one.