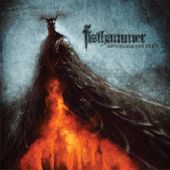 First of all listening to this album it's hard to believe that it's this band's debut album. The production is astonishingly clear and technical level of this album is amazing. Hard to describe clearly the genre, it's definitely Death Metal, but it's a great mixture of melodic branch with a lot of Technical Death Metal with even some bits of Metalcore and many other metal subgenres, originating from US as well an in Europe.

The album is a very exciting journey through all that is good in Death Metal - from furious blast beats with complicated riffs, through many slow-downs, acoustic passages and masterfully executed solos to mid-tempo parts getting close to Thrash Metal, with even few very Heavy Metal-sounding riffs. The longer I listen to this album, the more catchy it is. Yes, this is one of those albums which you have to listen to few times to discover all the flavours and shades. I think this is also one of albums which are best listened from the beginning to the end in one go. I find it really hard to choose just one favourite track, because to me it works out best as a whole, especially that it's recorded with nearly no silence between tracks. The changes in pace make it really engaging and the vocals are really powerful here. I guess there is some effect applied to make the vocals sound lower at few points, but there are also quite few moments where you can hear growling and shrieks without any effects. The lyrical subjects circle mostly around war with few relations to ancient cults which works perfectly with the musical background.

It is hard for me to compare it to any other bands, because there would be too many to list. The whole album is very well produced, the musicianship is at the very high level and it will surely leave you wanting more. Nowadays it is hard to find an album, where drums work so well with rhythms played by guitars. It's one of the best debut albums I've ever heard, that's for sure.

If you're lucky enough to attend any of Master's show in your area, pay close attention to Fisthammer, who are supporting them on their tour in US. There will be definitely many occasions for heavy headbanging, especially during 'Kull The Conquerer' or 'Doom of the Gods'.