First Rivers of Nihil, then Black Crown Initiate, and now Fisthammer breaks into realm of death metal scene with exceptional sophomore release "Infallible". I raved about this album here so I'm not going to repeat myself, but if you're serious about your music interests then you can't pass on one of the definite best albums of 2014. I chatted with Danny Piselli about the creation of their latest masterpiece, his drumming and possible fierce competition within local scene, enjoy. 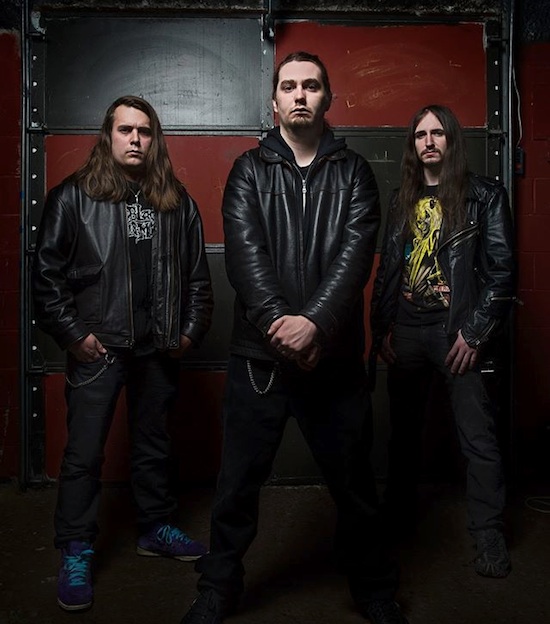 First of all, congratulations on a new fantastic album, to tell you the truth I really haven't seen a bad review yet. I thought "Devour All You See" was good but with "Infallible" you just blew it out of the water. Are you surprised with all those positives or you kind of knew you recorded something special?

It was about a year ago when we were writing the last few songs for the album that I told Max, "I think we've got the album of the year written here", and he kind laughed at me, but throughout the recording process I think we both really started believing it. And now as more and more people review it, it's nice to know I wasn't completely out of my mind for saying that.

After first record did you notice things that you needed to work on as songwriters and/or musicians to take "Infallible" to the next level? What were the biggest areas of improvement in your mind?

When we recorded the first album, we had been a band for 4 years. Most of the early days were spent jamming in the basement, learning how to work together and write a decent song. When we had the means to record our first real record, the feeling was "lets just take the best songs we've written thus far, and put them the fuck out already". I'm proud of that record, but I saw it as a necessary launchpad for what would come next. With Infallible, a lot more care was taken in developing the overall feel of the album, as well as making each track stand on its own. Let's just say, "a lot of fat was trimmed" [laughs].

Even-though "Infallible" is more technical than "Devour All You See", I find it more accessible and cohesive. Did you think about the overall album feel and direction when writing new tracks so they didn't become just numbers on the back of an album cover? What was different about writing process this time around?

I don't think it was ever spoken aloud, but we all felt we wanted to write a "darker" album than Devour All You See. The biggest difference in the writing process from Devour is that we stopped settling with riffs. We really didn't finish a song until everyone was 100 percent happy with the result. It sounds simple, but I don't think a lot of bands do that.

"Infallible" was produced, mixed and mastered by Carson Slovak & Grant McFarland at Atrium Audio in Lancaster, Penn - do you trust them that much to give all aspects of production? Usually (if financially possible), bands try to have more than one set of ears responsible for the final outcome...

I've worked with quite a few producers already in my young career, and I wish they were all like Carson and Grant. What matters most to me in the recording environment is the comfortability, professionalism, and results, and I think they exceed in all areas incredibly well. Max and I also recorded all these songs numerous times on our own too, so we had a pretty clear idea of what they should sound like.

It seems that from lyrical side you take inspiration from ancient gods, cults and so on. What inspires you the most about that subject?

Max does 100 percent of the lyrics on the album, and definitely has a vast knowledge of ancient mythology. It's also been a fascination with both of us, and the occult in general we draw much inspiration from.

One can't help but notice a goat and lots of upside-down crucifixes on your cover, is there someone/something you really despise?

There are things, but what the cover represents for me most of all is a balance. When people see us play, and hang with us, they're often surprised by our calm, easy going demeanors. At the same time, when they hear our music, they're surprised by our darkness and aggression. I think it's important to draw from both sides of the fence I guess, and that's why I love the cover.

You guys tried new vocal styles, guitar sounds, added classical touches; how all this pushed you as a drummer to experiment with new things?

I'd like to think that Max and I pushed each other to go out of the box. I know a few of the craziest things I recorded on the drums can to fruition because Max wrote an equally crazy riff and I thought "how the fuck am I going to drum to that?" [laughs]. But I also think I pushed his envelope as well, by suggesting more guitar ideas, and coming up with a few riffs myself. 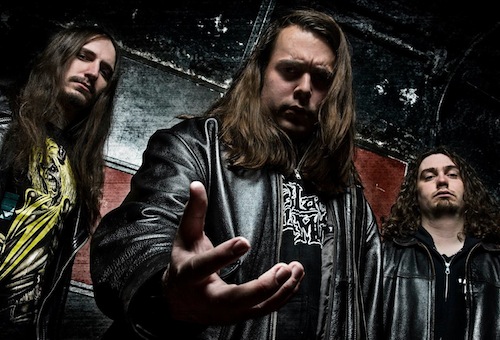 What's the most challenging song on the album to perform live and why?

'Evoking the Wrath of the Revenants' for sure. Not just because it's stupidly fast, but the phrasings are complicated as well. We haven't played it much live, but it's something we really want to do on our next tour. Figured we'd ease into that one slowly [laughs].

Do you practice drum playing on a daily basis or now it's band rehearsals only? Do you strive to be better on a technical side or go for more unique style and tone? I'm sure you'll say both but what area in your mind needs most improvement?

I teach drums 5 days a week, so I'm always around it, and I try to keep a consistent practice schedule throughout the week. I'm always striving to get better technically, but I know it's a long never-ending battle, so I patiently go about that [laughs]. As for the creative aspect of drumming, I think that's just something you develop by creating jamming with other musicians, and studying more complex rhythms. I know I could improve my ability to play in odd time-signuatres more. I feel capable most of the times, but then I listen to some Nile or Animals as Leaders or fucking Zappa, and I know I got miles to go.

I mentioned this is my review but how the fuck are you guys still unsigned? Waiting for call from Sony Entertainment?

[laughs] Wish I could tell you. Not sure exactly. I'll try contracting labels over the years with minimum response. We eventually came to realization that if a label wasn't going to sign us, that we just needed to go out there and build out fan base the old fashioned way, by touring. We funded our album release, and went out in February to do our most successful tour to date. I'm confident that a label will someday hit us up, but until then, we gotta keep on keeping on.

On a different note, is there friendly competition between you and Rivers of Nihil and Black Crown Initiate? Please say NO [laugh] and share some pranks you did to make their lives miserable…

[laughs] There is certainly a little bit of envy, but a healthy amount. It's what keeps the fire burning. I can honestly say I'm thankful that Rivers and Black Crown Initiate started blowing up when they did, because it's quality metal that the scene very much needs. And I couldn't think of a more deserving group of guys. Not too many pranks to share unfortunately. They played our Devour All You See cd release show with us, which was at a rock gym. Sounded like complete ass, which may have made their lives miserable for a time [laughs].

Was there leak in a nearby nuclear reactor that your area exploded with high caliber creative talents? What other events could explain this phenomenon?

Well we have had some brutal winters the past few years, so we may have just been forced to stay inside, be depressed, and write fast riffs all around the same time [laughs]. Not sure exactly the cause, but I'm just proud to be apart of it!

What are your touring plans to support "Infallible"? Don't you think the world needs to hear it…

We're looking to get some regional shows in throughout the summer, and then looking to do a long full us tour late summer early fall. As for the rest of the world, I'm counting the days until we can financially make that possible.

On personal note since I'm a vinyl collector, any chance of seeing "Infallible" on black?

I'm a vinyl collector myself, but as of right now, we have no plans to release on black. Hopefully a label will want to re-release it on vinyl someday.

Anything else you want to share with the world?

I just want to say thank you to everyone who supports Fisthammer, and I want nothing for than to come to your town, and kick as much ass on stage as I can for you!