For a young band, Italian Alldead impressed me with variety of stylistic solutions and songwriting maturity on its debut "End Gates". It looks like this band has all the artistic qualities to stand out from the depths of the underground, so I decided to dig deeper and learn more. Drummer Rudolfo gave me a rundown on how their first child was conceived and how cover band turned into something I'll be looking forward to in the future. 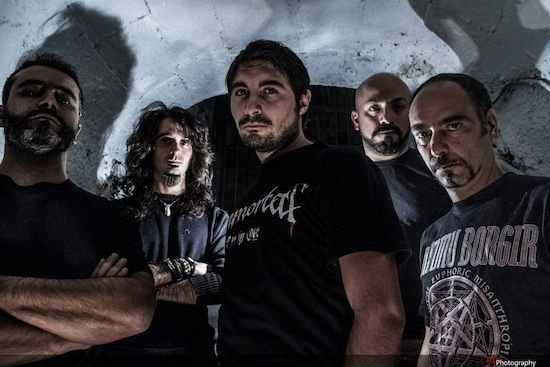 Since 'End Gates' is your debut, please introduce the band and tell us how it all started?

Hi Chris & Metalbite crew! I'm Rodolfo, I'm Alldead drummer and I'm glad to answer to your interview questions! Alldead was originally called "Redrum", a childhood friends’ band, born only to enjoy ourselves playing all death - thrash - metal covers. After some interesting local live gigs, we naturally quit rehearsing metal hits and started to create our own songs with the intent to join all our various metal influences. Lately Luca Miolla and Antonio War joined the project, the name changed to Alldead and with me, Aldo and Francesco we created the band.

'End Gates' might be you debut but it feels like you have been around the block for a while. Have you guys been playing in other bands before Alldead? What are your music backgrounds?

Yes you're right, we are not exactly metal kids. Each of us played in other bands in the past, like Aldo Francesco and Antonio, which come from various classic Thrash and Death metal projects. Luca is playing in two more bands such as Winds of Funeral (classic Black Metal) and with me on drums in Assaulter (Thrash Metal). And finally, I have been playing since 1989 in various projects and studio releases such as Funeral Oration (Sursum Luna), The Sovran (City Kills, The Sovran is Dead), Assaulter (Crushed by Raging Mosh EP) and various demo recordings.

You call yourself Alldead, album is titled 'End Gates'… seem like you're not giving us, humans, any hope and much chance of survival. Is this your vision for our future?

The concept of "Alldead " is the meaning of total end of the life on earth… where the mankind is going to anyway! It is also, for us, the total ending of the boring music classification and metal genres.

What do you have against classification of metal genres? I personally like to know what I'm buying. In the past I bought few albums based on the cover only and let me tell you those might be the worst purchase decisions ever. :)

We don't have anything against classifications, but when we started this project, we have decided to put no limits to the creativity and we follow only what appeared to be suitable for the proper development of each song. The vocal setting of Antonio did the rest...

Is end of the world your main lyrical subject? Are lyrics based on personal observations/beliefs or purely fictional stories?

With lots of music styles heard on this album the creative process must include many of the band members? Am I correct? How does your typical process of creating a song look like?

There is not a fixed creative process in Alldead. For sure we start our songwriting only when we feel inspiration and right atmosphere. We create music together starting from guitarist riffs during some rehearsal sessions, or other times one of us comes in the studio with a good idea and we work on the structure till we have a good result! If one of us is not satisfied (it happened in the past), we've decided to erase the entire song and restart from zero. 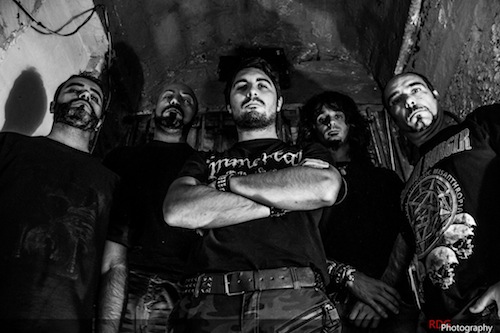 With so many ideas it seems like sometimes it's hard to let go few of them… Don't you think that almost 10 minute songs are a little too much for black/death style?

We basically do anything we want, and the description (black death) is only a "convention" to guide listeners and the public to our kind of music. By our point of view each song requires a different duration according as themes and structure we planned.

When writing new material do you see mistakes, things you would do differently on 'End Gates' or are you completely satisfied with you debut?

Surely, when each of us listened again to the album, we could find some things that in hindsight one could play or sing in a different way, but when you are in the creative process you are sure that at that moment you are making the best choices. It is normal that over time everyone would like to improve what they did, but I do not think that there are some real mistakes in the work done. I wish we’d never be satisfied... because I think that would increase the creativity as an artist.

Your album is self released. Is it your deliberate choice or you actively look for a record label?

Yes of course, we're actually looking for a record label.

What are band's short and long term plans?

We really move to play always more live gigs, abroad too, and as already said, we're looking for a record label for a worldwide distribution of the End Gates album! Anyway, we never stand with the fateful "idle hands" and we're just working on new more fast obscure and gloomy stuff!

Anything else would you like to say to promote your album or just get out of your system?

We consider our album a gloomy unconventional and powerful expression of metal music, so we would recommend it to anyone who loves to hear every nuance of this genre; that they will definitely find something exciting to hear! Follow us!