If moving 100 miles per hour heavy/thrash metal shreds that are filled with solos, crazy drumming and murmur of the bass and lyrics about battles and pillaging is something up your alley I would like to introduce you to California sons Exmortus. Slave To The Sword is their third offering and a solid piece of heavy metal excellence. I'd like to thank Exmortus for putting out one of the best metal albums out there and for finding time to answer my questions during their seems like never-ending tour in the beginning of 2014. I had a chance to hang out with the guys at Brass Mug (new and improved) in Tampa FL show during their East Coast Tour and here is what we talked about. Enjoy. 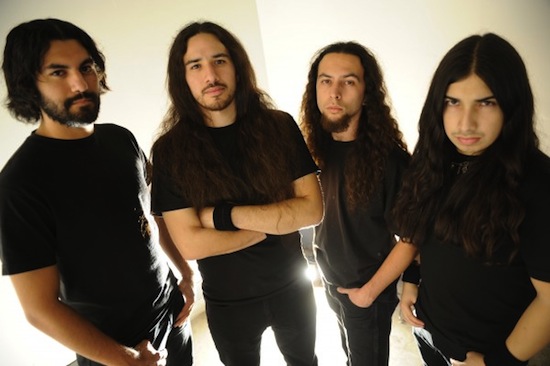 Exmortus just finished a tour with Dark Tranquillity and Omnium Gatherum. How was it, did you enjoy yourselves?

It was phenomenal! We had a great time with the Swedes and Finns.

Was it fun being around those guys, any tour stories you can share with us?

We miss them all! In Ottawa, Ontario Markus of OG played 'Bark at the Moon' with us. Check it out on YouTube!

You played it as sound check/warm up song at the Tampa show and it was immense!! We are going to include that one with the interview, Destruction/Krisiun tour is up next, are you guys stoked? Crowds should be way big on that one, are you ready?

We are very stoked!

Alright, let's get to it, band name comes from Evil Dead II movie, Evil Dead (the first one) was actually the first horror movie I ever watched and it scared the crap out of me when I was I kid (laughs). Are all of you horror movie fans, why did you choose that name?

Mario and I grew up watching horror flicks. We thought it would be an awesome band name. Little did we know the name was already taken by others before we were even born (laughs). Good thing we have a "-us" ending to differentiate a bit.

I like what you guys did and I think it goes well with how you present yourselves on stage. Did you have the chance to see new Evil Dead yet? What do you think about all the remakes that are being made lately?

It was a good gore fest, but nothing else really intrigued me. As for remakes in general, I'm not too excited about them. Though John Carpenter's "The Thing" was an awesome remake. A remake should have a good twist, if not then what's the point? I didn't get any of that in, say, the new Conan remake.

I wasn't too thrilled with it either and it still surprises me that with all stories that Howard wrote we don't get Conan movie every other year. Which brings me to this: your album covers could be covers of sci-fi fantasy books (Conan or Kane come to mind), lyrics are about battles, bloodshed and such, your nickname is Conan. Am I getting somewhere here or is it all just a strange coincidence? 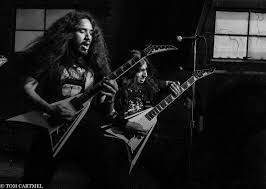 A Conan TV series based off Howard's original character and tales would be most awesome (laughs)! Oh you definitely went somewhere.

What is responsible for lyrical content of your albums? Books, movies, both? Where do you find ideas?

We get ideas from anywhere and everywhere. We just really enjoy imagining our concepts in fantasy/sci-fi settings. Reading Tolkien, Howard and Lovecraft, and watching horror and action flicks are obvious inspirations.

"Slave to the Sword" was sitting on the shelf for a long while even though material from that album is one of the best shreds I've heard in a long time, was it frustrating to know that your hard work is not getting out there, do you think it worked out for the best at the end with you guys being on Prosthetic roster right now?

We were a little impatient because we were just so excited about our new work. Before recording, it gave us time to test the songs out on crowds. After recording and before the official release, we had time to fine-tune the live performance. So, we feel it was a profitable wait.

'Moonlight Sonata' is completely instrumental, were you ever thinking of recording an album with instrumental tracks only, not a sonata but a symphony I guess (laughs)?

What an inspiring idea! Covering more great classics would be cool, but writing an "Exmortus Symphony" would be loads of fun for us. I aspire to pay homage to the masters of old!

Since you mentioned masters, who was the main reason for you to grab a guitar, what was the thing that "turned" you?

Kiss was the first band Mario and I got into. Hell, we even dressed up as Gene and Ace for Halloween many times. First band to inspire us to be performers.

I was just wondering, can you give me 5 most influential guitar players that you consider best and can you tell why so? 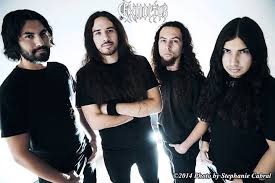 You guys are bunch of friends playing in a band but what I want to know is: what do you do when you’re not on tour or in a practice room, what do you do in the off time?

We just hang with the rest of our friends. Listen to music; watch movies, party etc... And if we're not writing or rehearsing for shows/tour, we're still jamming to our favorite tunes in the practice room for fun (laughs).

"Slave To The Sword" came out on vinyl, do any of you collect music on LP? What kind of music were you into lately? Do you prefer vinyl or CD?

I've been getting into collecting my "classical" favorites on vinyl. My preference is to listen to albums from start to finish. And what I like about LPs is that naturally, I'm more physically involved with the flipping of the record than the impersonal click of a button for mp3s or CDs.

Thank you much for finding time to speak with us. What's next for you guys?

Thank you for allowing us to share! We want to do as much as we can for "Slave to the Sword" and then, of course, start working on the next project.