In my humble opinion, Hour of Penance is death metal elite and there's not much I can add outside of my glowing reviews of their last two albums "Sedition" and "Regicide". With the latter being just out, I couldn't help but ask few questions about this soaked in brutality piece of plastic and how surroundings of 'holy city' shaped aggressive nature of this Italian death-squad. Guitarist Giulio was my source of everything vicious (even though I asked about writing ballads) and vocalist Paolo added few words on lyrical side. 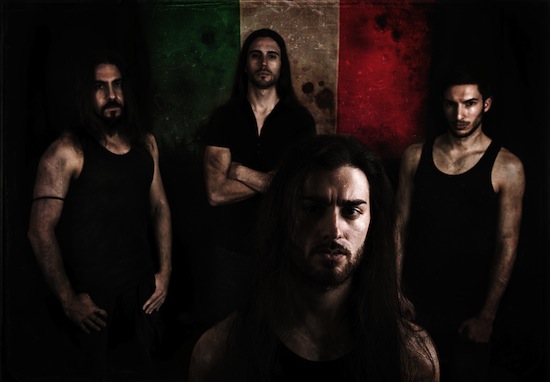 Congratulation on "Regicide", this album wiped the floor with my ass and left me bruised and beaten. Was this your intention when writing new material?

We didn't have any idea in mind of what the album would have to sound like when I started writing new music for Hour of Penance;  the reason is because I need more death metal to listen and play - so it's totally something that comes spontaneously for my need of new music. Speaking of Regicide in particular, I stayed away from metal for a year - because of touring mostly and because i didn't find anything good to listen to, I was starving for extreme music and that helped me with getting fresh ideas for the new album, and in less than 8 months i came up with 14 songs that ended up in the final tracklist of the album.

You just finished UK Tour, how does your new material perform in live setting?

We've played 4 of the new songs live (Reforging the Crown, Resurgence of the Empire, Theogony, Regicide) and I must say that we've gotten a good feedback from our fans. Some of the new songs are extremely fun to play, Theogony especially between the ones I mentioned, the old-school vibe makes it one of most head-banging songs we've ever written.

What is your favorite track (from all albums) to play live and which one usually brings the house down?

Paradogma is probably our warhorse, being also one of the most popular songs, but the most ferocious and hard to play is definitely Decimate the Ancestry of the only God from Sedition.

OK, let's talk about your new album. I know you'll say "Regicide" is your best record so, in your opinion why this album is better than anything you've done in the past?

I always used to look back at the past albums and i think that every album in our career is like a snapshot of the band, Regicide is an improvement since our past albums - many factors considered. We grew up as musicians thanks to all the tours we did in the past 2 years and that helped for sure technical-wise but also made us more aware of our capabilities. It's our most "inspired" album ever, it was the smoothest songwriting session we have ever done, we've managed to have 14 songs in 8 months and it's also the most varied material we've ever written, from speed light fast songs as Desecrated Souls to the slower Regicide and The Seas of Light. We've decided to leave the songs pretty much untouched, we've never erased a riff or changed dramatically a song, all that you can hear on the album is what i originally recorded here in my home studio - we wanted the album to sound in the most spontaneous way as possible. Individually we worked a lot on the songs, Paolo did a great job with the lyrics of the album and his "Gregorian chants" definitely helped giving the songs a darker vibe, as for James - for the first time in our career we had a drummer that not only performed what I've originally written with the drum machine, but he actually spent time changing the drum fills making the drums sounds way more organically. Marco, the new bass player, did a great job as well, this is the first time you can actually hear bass in our music. I think that it's not as easy-listening as the past albums; it actually requires few spins to fully comprehend what's behind this album and to enjoy it in its entirety. Production-wise we worked with two studios this time, the drums were recorded at our bass player studio (kick studio) between the European tour we had with Psycroptic and the Australian tour we did with Behemoth in October, we had the possibility to record the drum kit in a larger room so what you can hear, beside the triggered kicks, is all natural this time. Bass was recorded in the same studio too, while the rest was recorded mixed and mastered at the 16th cellar studio with our friend Stefano Morabito.

Where is this obsession with brutality, speed and aggression come from? Would you be able to write a metal ballad? [laugh]

Why not?! I think that the title track of the album Regicide is a great example on how we can write a slower song without necessarily blasting through all the songs.

It seems like you really pushed the needle on brutal aspect of your music; do you feel you can take it even further or next time you plan on toning it down a little?

The coolest thing of playing this kind of music is that you literally don't have any boundaries and pushing ourselves further every album is definitely the best part of it - it's very challenging and hard but without that where is the fun? I don't know yet how our music would sound on the next album, but one thing we know for sure is that it would be always death metal!

Is there unhealthy speed obsessed competition between Hour Of Penance and Fleshgod Apocalypse? It seems that with each album you two break new barriers and this might end with injuries…

Nah, there's no competition, and, anyway I think that we've already hit our maximum speed…  Above that, you can't really play any good riffs in my opinion, there's not enough room for the notes at some point… I mean you can do that, but it would probably sounds like shit.

Speaking of Fleshgod Apocalypse, it looks like there are a lot of things that you do together like record in same studios, tours, etc…? Did you guys marry each other's sisters and now are stuck with each other as one big Italian family? [laugh]

Well, we shared some band members with them, Francesco the drummer from Fleshgod - he used to sing for us - he was the singer on The Vile Conception and Paradogma, and he did a great job on those two albums, Paolo (our singer) used to play in a black metal band with Cristiano - the guitar player from Fleshgod… So, yeah that's why I guess… 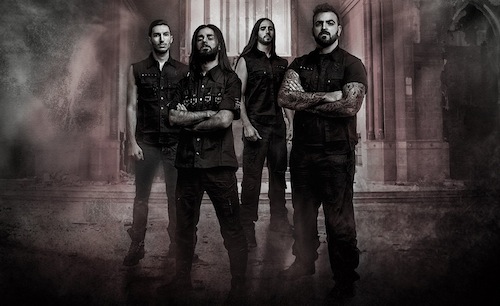 On more evil note, how much does surroundings of "The Holly Capital" influence your music. It looks like having a church on almost every corner brings 'the best' out of you…

It does a lot! You can feel the power of the Vatican in every corner of Rome, or you can just turn the TV or read the newspaper to find out how much the medias dedicates to it... The weight they had and they still have on our society is definitely one of the main problems of this country... Sometimes it's like having a second government that nobody voted but that still has the power to influence the decisions of our (corrupted) politicians.

What heretic message do you convey this time with your lyrics? Is lyrical content as important to you as music and whose king are you killing this time?

P: I wanted to write something that was immediate but at the same time I didn't want to rest in the usual death metal clichés, so I still used an aggressive lexicon while dealing with more profound and esoteric concepts about our human and spiritual nature. If you dig deeper into the meaning of the lyrics you'll find that everything is a metaphor for something more intimate than the classic death metal aggression, but it's up to the reader to extrapolate what's hidden between the lines.

G: It's definitely an important part of our music and it's something that gives our music a well-defined identity. We're not the kind of extreme metal band that is fascinated by the occult, and we don't have Satan all over the lyrics - we would like to separate ourselves from that - our message is clearly different from the one given by the black metal bands or the satanic death metal bands. The King we're killing this time can be the Vatican, or the government, or whatever institution is trying to brainwash you and make you as their puppet, in our specific case both as you can see also from the cover art.

This is just your second album on Prosthetic Records but you already get treatment as one of the main acts? Are you satisfied with promotion and euro balance of your saving account? [laugh]

I'm very happy the way Prosthetic records has been working for us since the day we signed with them, can't say if we're treated like a main act but we've definitely getting all the attention we need from the label. I'm very happy of course also with the income, right now I'm typing on my gold keyboard that I could never have bought without the HUGE sales of our album [laugh]

Why is "Sedition" not on vinyl? Is this your sadistic way of not given fans one of your best albums?

That's something we've discussed with Prosthetic Records already, we were talking with another label for the licensing of the Vinyl but for some reason it didn't work out. I'm pretty sure that Sedition will be released in vinyl as well, very soon.

I'm sure Hour Of Penance is your priority but most of you play in other projects like Aborym, Grimness, Promaetheus Unbound or Hiss from the Moat. How active are you guys in those projects and are they all still active? Some of them didn't really release anything in a long time?

Grimness and Prometheus Unbound unfortunately have disbanded a couple of years ago now. As for the other bands you've mentioned, Paolo is the songwriter for Aborym and they've recently released Dirty , I only help them live, Hiss from the Moat is James side project. We don't have much time for the other bands as Hour of Penance is our priority.

Italy usually is associated with wine but what is you favorite choice of alcohol so, I know what we'll be drinking when I see you in US?

Thank you for taking time to answer my questions. Anything you'd like to add?

Thanks a lot for your interview! For those who missed it… we have a new album out and you can order some cool bundles at prostheticrecords.com/hourofpenance, please support the music!