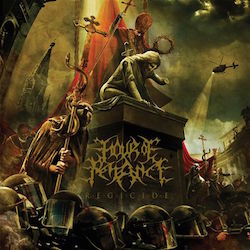 For a death metal enthusiast like me, new album from Hour Of Penance makes me as happy as a tornado in a trailer park. Last couple of releases were nothing short of a brilliant display of talent, culminating with "Sedition", where yours truly was left with no other option but to give it a perfect 10. So, where do you go from there? I guess old saying 'if it ain't broke, don't fix it' was applied with full might by our Italian bludgeonists, 'cause "Regicide" is an undeniably 100% relentless sonic assault that Hour of Penance accustomed us in the past, but if that's actually a plus or minus is only in the eyes, or more like ears, of the beholder.

Once again, Hour of Penance delivered impressive and filthy punishing death metal where guitar driven, brutal riffs dominate throughout the album and are backed by lightning fast drum beats and belligerent rhythm section. Their sadistic fucking urge to obliterate my auditory senses was only eased somewhere at the midpoint of "Regicide"! 'Resurgence of the Empire' and 'Sealed Into Ecstasy' are giving a little breather with spacier landscapes, melodic character and mid tempos but my ecstasy didn't last long, 'Redeemer of Atrocity' started with the fastest blasts on the whole opus! Our quartet's desire to lay everything to waste is viciously impressive. I never thought I'd say this, but there are moments that I think Hour of Penance became too brutal for its own good! By applying only subtle tweaks and refinements to their sick unholy formula, "Regicide" crushes everything they did in the past on brutality front, but at the same time it becomes more one-dimensional and less diverse compared to "Sedition", where I could spend more time head-banging rather than holding it back from fear of exploding. Heresy, ferocity and devastation are beacons of Hour of Penance circa 2014.

As far as writing the most barbaric album in their career, mission accomplished. Spitting sadistic yet very distinguishable tracks is something only a few can pull off, and Hour of Penance landed at the top of the class and graduated with honors. The biggest question will be - what's next? But for now, let's take in the masochistic pleasure from "Regicide" - a pure death metal bliss.