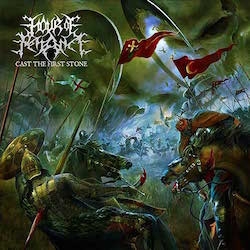 Hour of Penance performs a very vicious form of death metal.  This is music that is aggressive as it comes from the genre.  There are moments of respite, but this is a fierce album to be sure.  The music has momentum and drive to carry it along at a hyper speed.  The problem here is that there is really nothing to differentiate the album from Hour of Penance’s previous albums or other brutal death metal albums.  The music is straightforward enough, so there isn’t really that much of a problem with overly ambitious song-writing.  This does need to be mentioned, however, because Hour of Penance seems to play at a lightning speed that could be changed.

It’s just that there’s been stuff that’s done similarly to this album in the past and better.  Albums by Behemoth, Nile and Morbid Angel all come to mind as having similar music that’s more intriguing than what’s on offer here. The music is good, but lacks that extra something to be taken to the next level and greater.  The band sticks to the brutal death style for the most part and this is performed with a solid penchant for musical sense.   The song-writing is solid enough and leads to songs that are short and entertaining in nature.  The songs are pretty standard in construction and never get overly adventurous.  This all adds up to a strong album for the death metal genre that could have been made slightly greater with a little more work.

Fans of the genre should find this more than sufficient to their tastes.  There is an entertaining variety of music here and it really throws another solid entry into the genre.  I only wish the band would take things a step further and try to write more innovative and creative songs.  Still, Cast the First Stone is a fundamentally strong work of death metal.