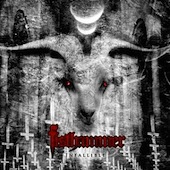 Finally there's something to get excited about death metal scene in US. I won't be calling any names, but during last couple of years latest releases from alleged giants of the genre didn't really spark much of any interest, and as much as I like to wet my pants from excitement - I was getting worried that I'll dry up my crotch and will have to start using moisturizers. Fisthammer to the rescue!

Fantastic sound, abundance of ideas, devastating riffs and waft of fresh rot will satisfy even the most finicky, hidden in basements diehard fans. Starting with prog-ish and rooted on eerie chords almost occult-ish 'Arithmos Tou Theriou' our Pennsylvanian trio builds up the tension that explodes with straight-ahead animal assault of 'Evoking the Wrath of the Revenants'. Steaming through 'Temple of Poseidon' and 'Automation of Flesh', they decide to add some melody and roll over my neck with heavy 'Doom of the Gods' and, since they figured that's not enough, kept adding weight to the point of almost crushing my skull by the end of 'Dismal Inveracity'. With complete disregard for my health Fisthammer opened all unhealed wounds and if it wasn't for hunting classical guitars and solo on 'Interlude', I'd most likely not finish writing this review. It was close 'cause 'The Coven' or 'Thousand Yard Stare' doesn't really qualify as easy-listening with its rollercoster tempos and tremolo pickings. They just kept hammering and hammering and...

Fisthammer interchanges technical, progressive and pure, crushing death metal riffs almost flawlessly, and once they'll figure out the perfect proportions - their blend will be maliciously luscious. Something tells me it will come with their next, so called "most important in band's career" third release, but right now without any hesitation, 'Infallible' will be one of the top death metal albums of 2014, and how the fuck these guys are unsigned is beyond me.