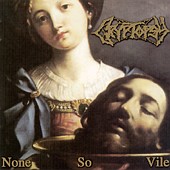 After making a name for themselves with "Blasphemy Made Flesh" Cryptopsy returned in 1996 to solidify their position as one of extreme metal's best bands with "None So Vile".

Cryptopsy is one of those bands that has no peers. No other band sounds like them at all, they are their own entity. They represent the extreme in every aspect of their music, from finger-lacerating guitar work to the most explosive drumming EVER heard, and some of the sickest vocals in metal compliments of non other than the infamous Lord Worm.

Opener ‘Crown of Horns’ lets you know exactly what your in for as Cryptopsy comes out with all guns blazing. This song is awesome and after listening to it you may say to yourself "man, that was so intense, I bet they don't play every song like that", only to then be hammered in the face by the next track 'Slit Your Guts' which blows away the previous song with it's calculated chaos and blistering speed, not to mention hefty, chunky riffs that will surely have you banging your head if it isn't already splattered all over the wall. At the 1:52 mark in this song, we are treated to a nice little bass solo by Eric Langlois before being thrown back into the musical tornado that is Cryptopsy.

‘Graves of the Fathers’ has an awesome intro riff that just reeks of metal and heavy as hell. This song is one of the more "linear" songs on the album. I use the word linear carefully because no Cryptopsy song is totally linear, but this one follows the same musical path more than most of their offerings. I could go on and on about how each song on here rules and is unique from the rest, but your better off hearing it for yourself. As far as standouts go, I would have to say that ‘Slit Your Guts’ and ‘Phobophile’ are my personal favorites, but they all kick ass.

Of special note is the high level of musicianship, which these guys hold. Jon Levasseur should be recognized as a guitar god for his work on this album alone, not to mention their other masterpieces. His riffs are second to none, and despite being extremely fast and technical, he still manages to get a surprising amount of them stuck in your head. The bass work of Eric Langlois is truly amazing. He is very technically efficient and doesn't simply copy the guitar lines like a lot of bassists do, but creates his own rhythms that create a thunderous, pulsating backbone to the music.

Now, on to the drumming which I think is what truly sets this band apart from the rest of the death metal masses. Flo Mounier's drumming is so unlike any other drummer I have ever heard that you have to hear it to believe it. He is constantly switching rhythms, but all while keeping the chaotic music going on tight and structured. Not only does he have amazing rhythmic capabilities, but he can blast faster than any drummer on earth. There are many parts on this album when the music is already fast as hell, then Flo blasts it into oblivion. His drumming during every second of "None So Vile" elevates the already amazing music to the limits. I should stop trying to explain this now, because I honestly can't describe his drumming in words, you need to hear it for yourself. In a genre infamous for hard to understand vocalists, Lord Worm takes the cake. His vocals are unbelievably sick and hard to understand. Even while reading along with the lyrics, you can't understand a word he's fucking saying! He basically just makes inhuman growls and shrieks. This might be a turn off to some people, but trust me, it doesn’t' take away from the music, and some how fits it rather well.

Bottom Line: If your a fan of death metal or extreme music, and want something totally original, buy this now. In fact, there really is no excuse for any metalhead not owning this great album by a great band. "None So Vile" is a rare gem in the metal world. Buy it or "go ahead and run, run home and cry to momma"!