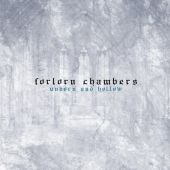 Type:
Release Date: 2013
Label: Self Released
Genre: Black, Death
1 Unborn And Hollow
2 And We Hail The Ones Who Fall
3 Desolate Resolution

I found it quite interesting when reading the band's description on Encyclopaedia Metallum saying that actually nobody knows who's in the band and how many people are there in the band. So I thought "I have to listen to it". And here it is - a real 3-track masterpiece in Death/Black metal style.

The production is very good, you can hear all instruments very clearly and everything sounds great. There are great harmonies, the riffs are amazing and being quite heavy album it's very melodic. And the melodies are very catchy, all 3 tracks present what is best in both genres. The EP starts with quite fast title track, the drumming reminds me a little of Emperor's 'Empty'. But the style here is more similar to what maybe At The Gates did on "Slaughter Of The Soul". And again the chorus is slightly slower with amazing melody lines of guitars. At some point I was even wondering that maybe that was done by Dan Swano, so melodic it is (but the guy is from Sweden, not Finland, so that's not an option). But I would also compare it to some more melodic stuff done by Edge Of Sanity and Pan.Thy.Monium, too, definitely.
Second track again starts fast, with fast paced one-string riffs. Lots of band really now come to mind, both Death and Black Metal. It would be too long list to mention them all here. Another great chorus with great melody lines and a little bit of melodic vocals. If the band was ever to perform live, they have to have 3 guitarists plus bass. Otherwise it won't sound as good as the studio release.
The third track reminded me of some Lake Of Tears tracks, maybe the riffing at some point is similar, but it's overall slow, heavy track with a tint of progressive elements. And again Pan.Thy.Monium rings in my head. Some little bits of keyboards in the background, nearly unnoticeable. Generally a really epic production, it's one of those EP's where every single second of music is perfect and I cannot stop listening to it. And cannot wait for the full-length release.

In the meantime I'm on the hunt for lyrics, because the vocals are so distorted, that apart from hearing the title in the chorus I'm not able to get a single word... Anyway - listen to it for free on SoundCloud, then buy it!