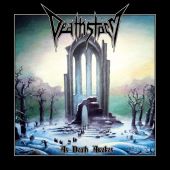 This album is a trip back in time. When I read "Raw Thrash" as a category under which IHate decided to release this album I was wondering what kind of rawness they meant. And now I know, and this album is a rare example of how underground you can sound if you really try. This is very Old School Thrash.

The album is recorded in a very raw way - no separate recording of each section, just the band entering studio and recording album "live". No additional effects, no polishing, no correcting riffs or drums, well, probably solos had to be recorded separately, because there is only one guitarist. But this raw album is such a beauty, that if you've ever missed 80s and early recordings of Kreator, you have to get this album. If you haven't heard "Terrible Certainty" or "Pleasure To Kill" or "Endless Pain", try this album to experience the same atmosphere in a fresh release from 2013.

The name of the band also chosen wisely for this genre, all songs are titled and have lyrics appropriate for aesthetics of raw thrash (or I would just call it old school thrash). There are distant traces of the first album of Iron Maiden in 'Nihilistic Delusion', possibly this climate is enhanced by slightly similar, underground sound of guitars and bass. Obviously it's like Iron Maiden, but played 10 times faster. Vocalist reminds me a lot of Kreator's Mille (obviously on early releases), screaming his lungs out. 'Nebelhexe' has unique intro, which only could be recorded by someone who knows how it was like to listen to those classics like 'Riot Of Violence' or 'Tormentor', maybe with a bit of 'Raining Blood' from Slayer.

Actually it would be quite interesting to know the age of musicians to find out if they really lived and breathed that Thrash or maybe dug it somewhere and loved it from the first riff. I keep on listening to this album and cannot help but be amazed how good it sounds, but most probably because it brings back memories of those late 80s when this music came to life for the first time. Brilliant attempt to introduce this climate to listeners in 21st century and from my point of view 100% successful. I've read some comparisons to Sadus, Morbid Saint and Sodom, so if any of these names ring a bell and bring uncontrolled nostalgic sigh, grab this gem from Austria and put it amongst your treasures. And then 'Await The Edged Blades' to cause 'Red Blood Spillag'e from your ears!!!