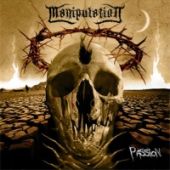 Manipulation – Passion is a set of ten juicy pieces of steady death metal with a tad of melody. Opening track “Passion” with its rhythmic mid-tempo introduces atmosphere of the album. Next “Unit” starts off referencing title song and releases the spirit of aggression, only to momentarily slow down spreading out the feel of death. Next one is “Sound Of Fall” also leading us with mid tempos, with its title shouted out throughout the song. “Blindness” gives us a taste of flash whipping. “Infinite Anguish” is a song that accompanies a video that can be watched below. “Seeps” and subsequent “Illusion Of Dominance” are bits in which fast pace thumping is intertwined with slow and devastating crush that is a trademark of nowadays death metal. It’s time for “Weakness” which is the most atmospheric one on the album and invites for some contemplation. “Moment Of Death” and finishing “Selfishness” are another two pieces of modern, throbbing death metal. Even though album doesn’t cover any new grounds for the genre, it has that something that makes you want go back to it. A big bonus for that album is little inserts that you can discover and gnaw on after completing every listen. I recommend!