Thanks to their album "Passion" Manipulation appeared on the metal map of Northeastern Poland. They're playing together since 2001, have two demos on their account, two full length materials - "The Future Of Immortality" and "Passion", but it was their EP "Resurrection" that caught my ear. These guys know what they want and are more than able to convey that. Maybe creature named "Passion" does not reveal a new world to us, but their vision of death metal with a huge dose of melody pierced a solid thorn in the side of this Christianity-poisoned country. I am surprised that no label got interested in them yet, but such is the fate of small bands coming from small towns. I encourage everyone to listen to the album, as it is the material to which you want to come back to, but before you do, read what guitarist - Rado.Slav had to say. 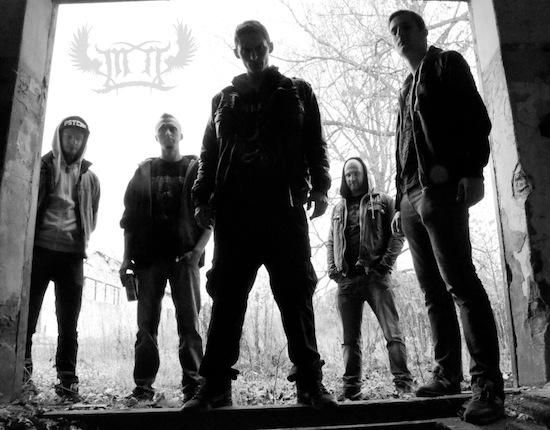 Hey, can you introduce current lineup, I see some changes again?

Hello, it so happens around here that if there are changes it is usually on vocals! It looks as follows, Kriss plays the drums, bass Bysiek, Vulture and I (Rado.Slav) on guitars (the same brigade since 2001), while, at the moment, vocal assistance is provided by Maciek from Empatic (where he takes vocal duties as well).

What was the reason for Stania leaving Manipulation?

You know, I think everyday life decided it for us with all kinds of problems sprouting like mushrooms after the rain, etc. You cannot support yourself playing metal, and while Stania entered the next stage of human existence - wife, child, job - trips and delegations, etc… we had to say our goodbyes. We did it in a very mature atmosphere, we keep in touch with each other, and no one is offended. As a matter of fact, on April 6 Stania will perform with us in Bialystok before Thy Disease. As you can see not too many people can endure with us for a long time, hence these frequent changes on vocal position (laughs).

Come on, don't exaggerate, it can't be so bad (laughs). After the mishap with Legacy Records, Passion was issued once again. What happened there?

Oh, don't even remind me of that clown and his pseudo label. Just after this clown fucked us over, we decided to start "Vulture Records" and released the digipack in the same form as it was going to be. The only difference is that with us you can buy it now for 20 zl, and from him it would cost 12 Euros with the delivery charge.

Browsing through the reviews of your latest release, it seems that you can look to a bright future. Do good grades translate into interest from publishers?

You can look at it with some optimism, but you know how it goes: if it's not the one it is the other. It was fine for a while, but now we have problems with the lead singer for the band, there's always something. Whether good reviews translate into interest of publishers is hard for me to say, we'll see with the next material as we look for a publisher. In October we booked some dates in the studio and we're going to record another album. Time will tell. I hope that this will have a positive factor.

Let's dig around in history a little. What's the story behind recording of the track 'R**k the Vote' for "A Tribute to Carcass"? Can your fans still count on getting something older than "Passion"?

This came as most of the events in our pseudo career that lurks around the corner – by accident. Kuba from MetalRulezProduction wrote me that there is such and such initiative, that it will be released by Metal Centre and that Tolovy will do a cover for it. Devilyn and other bands recorded their cover versions of Carcass, and he asked if we want to participate. So I just said yes. There was already a very little time left so we prepared a piece quickly, we went to Suwalki to the studio, we recorded it in a few hours and it went on an album. As for the older material the matter is as follows: we do not have any of them in a physical form, but mp3 files we do have. You know, we do not wish to invest money in the issuance of the old junk. In time we could simply put it on the web or something. As for the tribute to Carcass I think you can find some copies to buy on Metal Centre – the sales were probably poor (laughs). 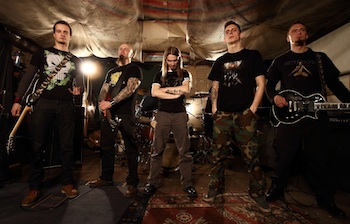 Let's talk about musical influences. Some bands get upset when you mention different band names next to theirs. Are you afraid of this topic? There's a reason I mentioned Carcass earlier (latter one), I would add some Dark Tranquillity and I would plant you in that company, what do you think?

People are different, some don't care, some get pissed off. What can you do? I'm not afraid of any topic. As for your pigeonhole, I totally don't know how to relate to it, because I've never listened to Dark Tranquillity (I personally do not know any of their work), and I know Carcass only very little. If we play like gentlemen from DT - I have to listen to it in my free time and then I could tell. If it comes to Carcass, I personally I do not see anything in our music that can relate to what they play. But that's the beauty of music. It means something different to everybody and it conveys different associations, comparisons and emotions. In an interview Peter of Vader said that song "Carnal" was once compared to Marilyn Manson, so you can see how it is with the all this classifying .

Yes, the fact is that every ear has a different opinion, but I encourage you to check out Dark T. still. Do not expect 100% likeness, but rather a style of music and technique (laughs). It is very well known that it's hard to support yourself by playing metal. You have to have a very strong will and undying energy to create music that's been pushed aside into the darkest corner of media in Poland. How do you manage to reconcile the daily life and creating of music, concerts, etc.?

What can I say, it's hard. But if you really love your passion you'll do whatever it takes to play. Very often many things fail – the dates do not match or something other than that and then come moments of doubt and this is when our wings fall downwards. But there are also great moments that give us the wind beneath our wings. We're like a ship that keeps going with the wind - or against it. Manipulation is our life, and the job is an add on that allows us to invest in equipment and the band. A tiring add on, however. An add on that takes most of my free time and most of the energy from each of us.

Can we peak behind the curtain a little? Can you tell us what's going on with Manipulation, is there a successor of "Passion" already?

Yes, we're working intensely on a new album. As previously mentioned, in October we enter the studio and we'll record new material. The other news is that we are preparing to record a second video from the album Passion. I will not tell which song it will be at this point. If everything goes well, we're hoping to manage to record a second video.

Thanks for the interview, go crazy at the end, we won't cut it out.

Thanks for the interview as well. Concerned ones can keep track on our profile on FB. www.facebook.com/manipulation.net I also want to invite everybody to our store at www.manipulation.8merch.com