Armagedon was founded by brothers Maryniewski (Krizz & Slavo) and in Poland they need no introduction. Loved by some, by others not necessarily but that seems to be the story with art; personal tastes are not up for discussion. They are considered a cult band in their homeland, but abroad they're not appreciated, most likely because they're not known. Blame should be placed on the lack of touring and the 11-year hiatus, but musically I find them to be one of world's top death metal bands. No mistake here - one of world's top death metal bands - and if you still need convincing, you have to check out "Thanatology". Slavo was kind enough to answer my questions - so judge the outcome of our conversation yourselves. 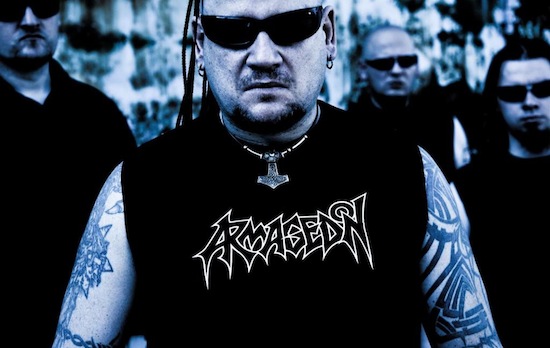 Welcome Slavo, what is the feedback on, in my opinion your best work yet, "Thanatology"?

Hello, thanks so much for such an evaluation of our new album. When we were finalizing work on "Thanatlogy" we knew it’s alright! Even at early stages of production – when our material was still in a very raw form, it was listened to by a lot of people. Then at the final stages of mixes (already in the Sound Division Studio) many of our friends visited us, and each time the reception was very good. Each of them emphasized the great progress but still keeping the characteristic style of Armagedon. When our new material (in its entirety and all finished up) was heard by our publisher, he said the same thing - we knew it’s really good! We were putting new songs (teasers) up on the web successively and our fans also really liked them. Then, after the official premiere came the first reviews and opinions of a wider audience. Generally, the reception of the album is more than very good! Unfortunately, nowadays it is not enough to beget such a work and think that everything will go on by itself ... Although we get a lot of support from fans, we are missing on opportunities to reach out to a much larger audience that we believe "Thanatology" deserves. To summarize, reception and reviews of the album are very good, but our reach is limited...

First time I had the pleasure to hear you was in the castle in Ciechanow at S'thrash'ydlo 1989 or 1990, I can’t remember. Long time ago. How would you rate your way from "Survival Time" to "Thanatology"? The road was bumpy, and there was no shortage of obstacles on your path wasn’t there?

You know, when playing extreme metal you kind of agree to the hard work and to the long road ahead. With this kind of music success does not occur overnight. Usually it takes years of hard team work (which is often very difficult – there are plenty of examples of bands, where only the leaders are left in them). We focused on the band back then. We were a group of friends, but unfortunately for us, from small towns located somewhere "in the middle of nowhere" ... And that meant a hard and difficult way to break through. Besides, we were not a band playing "popular" sounds (even in metal). It always was (even then) a total underground! I think our success back then - in addition to the fact that we were spitting out some interesting sounds - we owe it to our fans that have supported us amazingly, wherever we appeared to play concerts. There were administrative, logistic, contractual and many others hardships, but I think we managed. Our first two official productions from that time: "Dead Condemnation" and "Invisible Circle" have a cult status until today! There was a bit of a forced break later (didn’t expect it would take so long) and now for nearly six years we kept recording more albums and played more concerts again. I know that spectacular career is not waiting for us anymore... We understand it, and therefore can record better and better materials without all the pressure and expectations. The road we have traveled, and still walk on is not easy, but it gives us a lot of satisfaction!

I personally have a great fondness for those years. I’m often remembering great bands that are gone already, such as Egzekhutor, Imperator, Slashing Death, and many, many others. Although I understand that passing is the normal order of things, I get teary eyed sometimes. How do you remember creating processes back then, artists, touring, etc., and how would you rate it these days?

I think this is a topic that’s so big that you cannot tell it in just a few words. At that time when we started the band (around 1986) - everything was different ... literally. The world, our country included, looked completely different. Our first live performances had to be approved by the provincial department of censorship – can you even imagine that today? There were amazing stories of course, memorable concerts and friendships, some of which survived to this day. But it was too gray and full of hopelessness. Music was also a way for us to break away from contemporary reality. Besides, in contrast to the present times – there was just not enough of it. I know it is hard to imagine in today’s world, but back then there was no easy access to bands, albums, and recordings. There were no real festivals. It was not until the early ‘90s, when the situation began to gradually improve. Today everything is flooding us in every area and aspect of life. It is no different with music. I like the situation, when I’m the one to decide and chose who to listen to, whose concert I go to and whose interview I read. Unfortunately, this generally available message has to travel a difficult path to reach the final recipient. Valuable albums often do not reach persons to whom they are addressed. I think we’re a good example of this phenomenon...

Your first CD after reactivation - "Death Then Nothing" was one of the most interesting materials from returning bands. Did you manage to once again gain interest of the western music market in your recording?

"Death Then Nothing" was mainly a return album with which we wanted to remind our fans about us after many years of absence. The assumption was meant for local market only. We did not conduct any aggressive campaigns to release it outside Poland by other labels. We are very pleased though, that our publisher Mystic Production released it in Europe and USA through a network of distributors.

Let's go back to "Thanatology", who is the author of each batch of the act, i.e. lyrics, music, cover and artwork?

"Thanatology" is primarily the result of teamwork. As it always is the case with Armagedon - music was created in stages and was created by Krizz and arranged together with Adam. Lyrics are my work, and cover art is our ideas graphically dressed up into a cover by Xaay (we worked together already with DTN). I think that each of the elements of the new album fits together and at the same time can create separate stories.

Could you let us a little on the secrets and summarize individual songs from this album?

"Thanatology" is a collection of eight sound killers, but it's also eight quite disturbing images associated with leaving and passing. Simple stories, without deep metaphorical undertones. I think they represent an ideal unity with our compositions. Everything fits together and supports one another very well. It is also a natural continuation of our previous lyrical layer enclosed in the words: death then nothing! I would not want to analyze individual tracks - I think that they are solid as a whole and follow each other in a natural way. Each of them contains different but characteristic fragments (i.e. Caesar's vocals), but it is best to come to this by yourself, listening carefully to the songs.

It seems to me that as musicians you have come to the stage of you career where you don’t have to prove anything to anyone by creating another record. What was the reason for Armagedon to get back to the studio after four years of rest?

It is four years already indeed... However I see these four years as more of additional ballast on my back than the interval from the release of "Death Then Nothing". You know, we actually perceive it a little differently. We are not a band that has rigid publishing and concert duties. Every next record is an act of creative summary of the time intervals of several years of playing and creating together. This approach allows us to spit out better and more mature sounds. Just like in case of "Thanatology".

I see that the line-up has changed a little bit yet again, did it have any bad influence on the creation of "Thanatology", and does it change anything in the current concert power of Armagedon.

The album was recorded by Slavo / Adam / Krizz / Bartosh , which is the lineup that we played with for the last few years. We always try to give back and give our fans something special and unique! The time that we gave ourselves from the release of the last album, contributed to our unison and understanding of each other (also musically) - we have a lot of confidence in one another and as a band after those few years. This resulted in the fact that while creating and recording "Thanatology" we stepped outside the standard templates that were with us before. This time around, each of us brought a lot of their own ideas and had a lot of "creative freedom". While having just a frame of the song, we watched them with undisguised joy transform step by step into very fulfilling musical creatures. This way of working on the album produced very consistent, proven and strong material. After the recording of the album Bart (Azarath) joined us on second guitar strengthening very much our concert power. We played a few gigs together already and "the force is with us"!!!

Science of dying would seem such a simple idea for the album title for bands playing death metal genre, but it seems to me that you were the first in the genre to use that title. Why do you think it was?

Hmmm, tough to say... at the early stage of work on the album we knew already in which direction we're going to go lyrically. We were looking for a title that would bond these simple stories. And I think we succeeded. We never created some unrealistic stories, we didn't sing about dragons, and other nonsense. "Thanatology" is solid in the form of verbal communication, motto, and music!

Thanks for the interview Slavo, I sure hope that it will bring closer the silhouette of Polish Armagedon for the people abroad and to all the other metal maniacs peeking onto metalbite.com webpage. Thanks again and see you at the concerts.

Many thanks for such a thorough mangle! All those who would like to know Armagedon made in Poland we invite you to visit our profile: http://armagedon.bandcamp.com/
Entered: 4/4/2014 12:00:00 AM