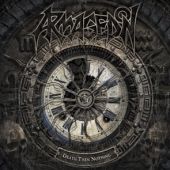 This Polish death metal band was founded in 1986, then broke up in 1994. They reunited in 2006 and put together a new onslaught of a release entitled Death Then Nothing. The current members feature Slawomir Maryniewski on vocals, Krzysztof Maryniewski on guitar, Rafał "Ra.V" Karwowski on guitar, Tomasz Solnica on bass and Adam Sierzega on drums.

The music features guitars that are heavily distorted and brutal sounding. Tremolo picked riffs with fast tempos mixed together with some slower parts and the use of synthesizers to augment the eerie music in a few instances. This band spews forth classic death metal with catchy tracks such as the title track and "Blanket of Silence." There aren't that many leads on this release, only on a couple of the songs. Musically speaking, the band displays vintage death metal. There really aren't any releases by this band to compare with except for their debut, which was released in 1993. It's good that they were able to reunite and put together a solid follow-up.

I really enjoyed the riffs of all different variety. These guys, even though they're veterans now, still know how to concoct death metal that is well played out. The songs are really memorable and innovative. That low end guitar sound is way well displayed and is technical. No matter which song that you choose, all of them are great, with many interesting outputs. Vocal wise there isn't much variety-just low bellowing throat. The drums contain blast beats and plenty of double kick parts. Use of these techniques go well with the guitars. Every song contains at least some fast tempos; there really aren't many parts that are slower paced.

This production is solid sounding with each instrument mixed in well together. It isn't flat or poorly integrated. You can hear everything pretty clearly. A great job done here. It makes the listener want to hear this release undoubtedly. I am quite impressed that the band managed to choose a producer that did them some extreme justice. The lyrics aren't featured on this release insert. However, it's safe to say that from the song titles, show that they don't have much else to sing about except death. This is of course a grim topic and it's a shame that they don't have their lyrical contents displayed for the public. There are no cover songs on this release. It's just over 32 minutes in length of classic Polish concocted death metal.

In summation, Death Then Nothing is a strong comeback album that contains tracks that are heavy and intriguing. Again, not much variety in the vocal department, but still they managed to fit it well into the music. If you're interested in hearing some fresh death metal with a great production sound, then this release should be owned by all death metal fans.