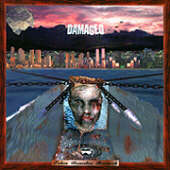 Damaged are a band that seems to be completely geared around the creating riffs and lyrics to support the insanely cruel drumming of Matt. These blokes come from Australia and as such they are a relatively undiscovered act internationally, as per the norm in the Australia metal scene.

Vocals for “Token Remedies Research” (and indeed any Damaged release) roar along at 10000 miles per hour, which is exactly the same for the drumming. As a result, the lyrical content would amount to a good few chapters worth of words in a decent sized novel, if they were to be arranged in such a fashion. The lyrics are absolutely undecipherable spewed out like they are, words I was able to make out are; “Ohhhh”, “Uggghhh” and “Arrgh”.

“Token Remedies Research” is Damaged’s second full-length release after their immensely popular debut, “Do Not Spit”. Like the first album, content is concerned with politics, pharmaceuticals, murder and other contemporary urban issues prevalent in today’s big cities.

Unfortunately for “Token Remedies Research” it seems to hit a brick wall after about 20 minutes, and tends to drop off in it’s initial ball-breaking impact towards the ending of the album, leaving the consumer thirsting for more grind/death action. So in summarizing Damaged is good for half of the album, but sucks cattle-prods for the other half. (If you are particularly handy with a circular-saw you could make yourself a nifty, small EP from “Token Remedies Research”, because the second half is really, really shitty)