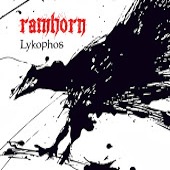 Ramhorn is a one man band project of guitarist/vocalist Dectro from Greece. It started out out as a traditional doom band releasing two albums. 2005's Crystal Vanity and 2007's Damaged Equilibrium, both of which received poor reviews. Dectro took 7 years off and revamped his sound, giving doom metal up for 1980's thrash metal with a blackened vocal approach.

Lykophos is the third full length from Ramhorn. After several listens nothing really stands out. It's not a terrible album and it is definitely an improvement from the first two, but it's not memorable in any way. I must also state that I am not into the retro thrash movement, so those that are may find this interesting. Most of the ten tracks are mid-paced with a couple that have a little speed to them. The vocals are on the harsh side, but the words are clearly pronounced, think Chuck Schuldiner . In fact his voice even resembles Chuck.

Ramhorn has made improvements with Lykophos, but aren't quite there yet. Those who like the retro thrash movement will find value in the album. He is proficient at playing the instruments and the production is good. Dectro is finding his sound and had improved with each release. He is more suited in playing thrash than he is playing doom. I hope that he continues on this path and further refines his sound on the next release.