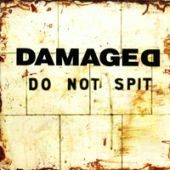 If space travel was based upon how fast someone could drum then Damaged’s Matt would surely be responsible for sending spacecraft and rockets through into new dimensions in our solar system. That’s right, this guy is fast, possibly one of the fastest death/grind/thrash/slash drummers ever.

Damaged are a self proclaimed ‘hate-core’ metal band, whatever that is, but if it means that Damaged hate shit a lot, then they certainly live up to their label. If you thought Devin Townsend was pissed when he recorded “City”, then bend over and take it up the ass Devin, because Damaged will teach you lesson with hatred and being pissed. Damaged seemed to be annoyed with everyone in Australia, be it the government, people doing drugs, prostitution, pharmaceuticals, murder or rape, these guys have something to be angry about. Just to prove how angry these guys are, switch onto track three, ‘The Travellin’ Manic’ and witness the melody of an angle-grinder in action.

“Do Not Spit” is Damaged’s debut album, and is based upon hatred and speed. Speed is everything to these guys, speedy guitars, speedy vocals and fucking uncontrollably hyper-based speed drumming. Matt is too fast.

All tracks follow a common theme through this album and I do not need to spell it out to you. For me the ultimate tracks on this album are ‘The Travellin’ Manic’ brutal uncontrolled aggression by Matt on the drums gets an adrenaline injection from a angle-grinder which sends this track into dizzy heights of brutal-ness. ‘My Grain’ and the closer, ‘Nails’ are also memorable grind/death tracks spewed forth in guttural surges of chaotic fury.

Bottom Line: If speed is your thing then you could do a lot worse than dig up this Aussie sensational debut from ‘hate-core’ specialists Damaged.