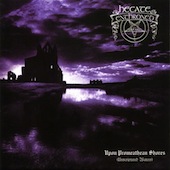 Is it possible to write a review for Hecate Enthroned without mentioning the name Cradle of Filth? Of course… not! The influence of the role models is just too great. Anyway, bands like Attic also follow the route of groundbreaking pioneers. The question is not whether or not an album offers new or innovative music. As long as the material knows to convince, everything is okay - and that's the case here. Thus, it can remain a footnote in the history of black metal that the sound of Upon Promethean Shores (Unscriptured Waters) was more or less innovative in 1995. Cradle of Filth were the inventors of this symphonic yet currish style, but they did not have the monopoly on it and there was only a very small number of further bands that walked the same path as Hecate Enthroned. Thus, the band was not ahead of the pack, but the guys also did not follow a massive trend.

Despite the rather dull sound, the release does not lack power. Especially "The Crimson Thorns (My Immortal Dreams)" scores with pressure, velocity and heaviness. The hoarse and guttural vocals fight with the fairly pompous orchestration and the result is great. Another advantage of the song is that it only lasts 4:25. Already the song titles reveal an affinity for opulence and the bombast of some overlong pieces is not everyone's cup of tea. Songs like "A Graven Winter" do not suffer from lackluster sections, nevertheless, a slightly shorter length would have been no mistake.

Of course, the usual suspects, I mean words such as "epic", "majestic" or "monumental", come to mind when listening to this debut, but despite their duration, the songs are not too interwoven. Many straight and fast sections occur and ensure a pretty direct effect of the music. The guitars and the keyboards shape the songs while building a kind of musical condominium and complimenting each other harmoniously. By contrast, the rhythm section makes no crucial contribution. The drums are totally generic, but the variable vocals provide compensation for this. Lead singer Jon Kennedy was only 17 years old (and almost still in the cradle... pun!) at the time of the recording session, but his mean nagging, high-pitched screams, arcane whispering and demonic growls shape a mature performance. That's a really good thing, because songs like "To Feed Upon Thy Dreams" demand precisely for this flexibility in view of their mix of harsh and melodic parts.

All in all, Hecate Enthroned enriched the black metal scene with their debut and it is useless to discuss how much Cradle of Filth was in their sound. The stylish artwork did not promise too much; a new force with a holistic concept was on its way and underlined that black metal had more faces than just ugly (yet fantastic) lead guitars that blew their ice-cold winds from Norway into the rest of the world.