UK-based symphonic blackened death metal group, as officially described on their profile, Hecate Enthroned, have just released their latest album, 'Embrace of the Godless Aeon'. This album seems to be getting very good reviews, including our website and 100% on Metal Archive for example. And it’s for very good reasons. In my own humble opinion this album might hail the revival of old-school symphonic black metal. I’ve had a pleasure of asking the band few questions that were nurturing me while I was listening to and reviewing it. 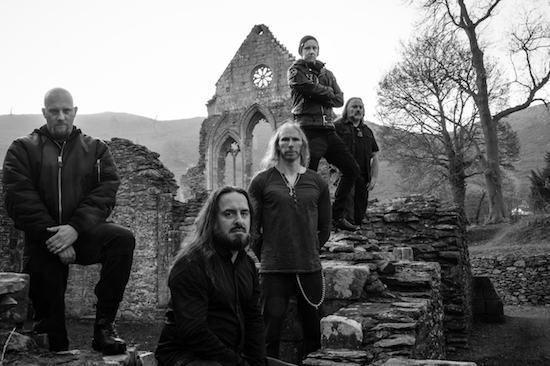 Thanks a lot for finding some time to answer these few questions. Your new album Embrace of the Godless Aeon has just come out. It's been a while since the previous album, Virulent Rapture. Could you please recap those 6 years in few short words and at which point you started thinking about writing new material?

Dylan: We actually had this album written quite quickly after Virulent Rapture as Joe came in soon after Elliott leaving, and we even had the album recorded and mastered around 2 years before we released last month. We have always been prolific writers the problem has been finding a suitable deal or label.  And the majority of that 6 years (like the gap after Redimus album) was spent finding a decent label.  We did a couple of shops with the album but didn’t get the offers we wanted so rather than 'sacrificing' the album on a lesser deal we remained patient and kept looking.  This deal with M-Theory Audio came from our management team Extreme Management Group plc and it was well worth the wait as M-Theory have been superb and it’s a great deal that this album deserves and it’s an incredible release that our fans deserve after the long wait.

If my information is correct, the whole material was recorded between Feb and Apr 2016. What happened between that period and the release date? Was it mainly a quest to find the perfect label or was there some other reason for such delay?

Dylan: Yes, that’s it basically we were looking for the right offer, we had quite a lot of offers come in but they wouldn’t do the album justice and we sacrificed Virulent Rapture just to get something out and break the hiatus, so we were patient and waited.  This deal with M-Theory Audio is the real deal and we couldn’t be happier.  Also having a second album on the contract really gives us the opportunity to build some momentum.

Is the order of tracks reflecting chronology of writing new songs? Have they all been written within these 3 years (between Virulent Rapture and Embrace of the Godless Aeon)?

Dylan:  They were all written during that time, some completed quicker while others remained unfinished and took a bit more work to come together but that’s how song writing goes.  Sometimes a track or passage can take a while until it fits in with something else.  The track order on the album was more to do with the flow of the music and the lyrical content, the album builds in intensity and emotion as it plays.  Joe was quite confident on a running order.

Joe, you had quite some time to get used being a part of the band (since 2015, about a year before recording the album). Has it helped creating the new content? How were you involved in composing new tracks and the final shape of the album? How did it look like in case of the rest of the band? Was there someone leading the whole process or was it a cooperation of all 6 of you the whole time?

Joe: All the tracks for the album had been written and demoed by the time I came into the band, although we were still tweaking bits and pieces in practice. But I was given free range when it came to arranging the vocals and writing the lyrics which I did over the coming months. We got a chance to play everything live in practice with vocals in full before the recording, so if anyone had any ideas or suggestions they would have a chance to voice them before we went into the studio. Everything was a real collaborative effort and while certain members led when it came to particular areas, everyone had a say.

The previous album had quite a bit more death metal elements, now I can hear more old-school symphonic black metal in the spirit of mid-90s. Was it a basic premise from the very beginning or was it a result of evolution of each track?

Dylan: We have never tried to write in a specific style, it’s a very natural process and a product of how we feel at the time or where our influences lay.  We naturally have a death metal and black metal style to us, not just in the music but in how we play, and the symphonic elements have always been a very important side of the band so of course we have always written songs that possess all these qualities.  Sometimes the death metal edge will come out a bit more due to certain riffs or emotions; as on Kings of Chaos, Virulent Rapture but those albums also have a lot of orchestration. It has a lot to do with the mix of aggression and grandeur that we use.  When writing for EOTGA it quickly became clear that the more epic side was taking the lead and the songs developed that way.  The formula for writing is usually set down with the first 2 or 3 tracks.

What were the main changes in the equipment you used to record this album? Do you all use the same instruments recording the album and then playing it live?

Dylan:  We used the same guitars that we use live, Nigel – Jackson, Andy – ESP, Dylan – Ibanez but we used a Kemper to record them down while live the guitarists use Marshall Amplification with Line 6 Helix pedals and I use a Warwick bass rig or as I have now a DarkGlass Alpha Omega Ultra Pedal. Obviously recording in a studio digitally is a lot different than playing live.  Gareth got a new drum kit for the recording, a Mapex kit which gave a heavier natural sound and Pete recorded with his Korg keyboard which is also his live keys.

Every band being on the scene for a while develops a special taste in certain tools they use. Do you use any customised guitars? Do you have your favourite strings you use or are being endorsed by? I heard that you are using Sinister Guitar Picks - what made you choose them over other brands?

Dylan:  Yes I, Nige and Andy are endorsed by Sinister Guitar Picks, they are incredible!  They last longer than any other we have used and give more control and precision.  The quality of the print on them give a great grip and feel and their metal edged picks give such a tight biting sound, big shout out to Joseph at Sinister.  Nigel is endorsed by Jackson guitars and has always used those and they both use Ernie Ball strings.  The recent purchase of the Line 6 Helix guitar pedals has made a huge change to our live sound, it’s massive but clear and very controllable, same with my DarkGlass bass pedal it’s the best bass sound I have ever had and it’s so user friendly but gives so much power and clarity. Gareth is endorsed by Axis Percussion and has been using their pedals for several years now. It’s easy to get used to something but it’s also good to try different products as technology is moving so quickly there could easily be something better out there or more suitable but if you don’t look you will never find out.  It’s always personal to individuals but the tech nowadays is so versatile you can tweak things to be just how you want it.

Have you played any of the new tracks live before entering the studio or was it all recorded first and then tested on stage? Which tracks are your favourite? Is there THE ONE favourite track for the whole band to play live or is it more of one favourite track, but different for each of you?

Joe: My favourite track seems to change from day to day, but I think “Whispers of the Mountain Ossuary” always stands out for me. We haven’t played it live yet, but I hope that we do in the near future.

Sarah Jezebel Deva appeared in (only) 3 tracks on this album. How did you pick tracks you found she's a perfect match for? And why not "Enthrallment"? (actually, you can skip this question, I just love this track and thought of hearing her voice there) Do you think you could go on tour together at some point or at least play few shows with her on stage?

Joe: I think the songs that Sarah appears of really stand out because of that, her voice is incredible. We have performed live with her before several times and it’s always been fantastic, so any chance we get to do that we jump at it.

M-Theory Audio seems like quite interesting label, how did you choose them? Are there any chances of you performing with some other bands from their roster? The Absence for example? Are you planning a tour following the release of the album?

Joe: M-Theory has a fantastic roster and there’s plenty of bands on there we would love to do shows with. I’d welcome a show with The Absence, I was watching one of their music videos just the other day.

What the nearest and further future holds for Hecate Enthroned? Any new material ready? Have you already thought of entering the studio again? Any big festivals planned?

Dylan: Priority was this release and now it will be supporting the release with shows and fests in the summer.  We are currently working on the live set and getting that ready with new songs.  We are writing but we always have ideas kicking around and we will start putting the ideas together now as something a bit more solid as we are contracted for a second album with M-Theory, no timeline for this yet but we like to be prepared.

Sarah mentioned you need money to afford good old people's homes, how is that going? You plan on setting up some Patreon account to achieve that goal?

Joe: Old people's home? Perhaps… I am turning 33 this year after all.

Dylan:  At my age I certainly need a pension plan, but unfortunately black metal won't be providing that…. luckily, I sold my soul to the devil.

Many thanks for the interview and many thanks to everyone for supporting us and standing with us, we hope to see as many of you as possible out on the road soon!