The simplest description of Demonik sound and the music would be to mark them 'thrash'; but it wouldn't do justice to what is going on 'Rise From Chaos' since there is so many more pieces fused together on it. Bay Area thrash is a solid base but the addition of the elements of melodic death, power/symphonic, groove some modern metal that bumps their new album from interesting category to truly remarkable. Bands like Annihilator, Testament, Death Angel, Machine Head or Trivium come to mind so if any of those bits seem interesting and if you like to know more about Demonik and 'Rise From Chaos' just keep reading. 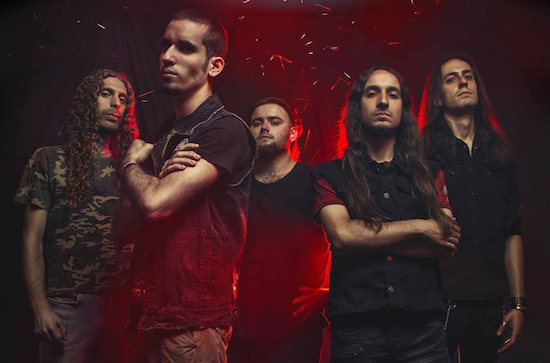 Thanks for talking to MetalBite.com, how is the weather in beautiful Madrid?

Gonzalo: Between sunny mornings and beyond the wall when night falls.

David: Pretty weird for a month like March, it should be still freezing at this time of the year.

Hugo: Hi, the weather has gone crazy, now it should be rainy season but it's hot. Madrid is a city of contrasts; very cold in winter and very hot in summer.

I always wanted to visit and still hope it will happen. What is the best time to visit?

Gonzalo: In my opinion, in the middle of Spring because the weather is smoother, sunnier and the landscape way more colorful.

Hugo: I hope you come to visit soon. This city is very open for all, and it is full of history, monuments and good people. The best time to visit it (for me) is May or September.

With Madrid being a major city, you must have a ton of tours going through it all the time. Am I right?

David: You are. Despite the fact there are still some bands that think Spain does not deserve a few stops in their tours, most bands think different and a gig in the capital is always mandatory.

Hugo: Yeah, you're right. In Madrid we can enjoy the best tours of our days, we're lucky in this aspect.

Let's talk about Demonik. The premiere of the new album happened last year, album is getting good reception and it rakes in solid notes and ratings. How do you feel about it, is it anything you expected?

Victor: Of course, we hoped for the best when we released the album, since we´ve put a huge effort in it, from the writing process to the final stages of promotion, and everything involved between that. But it´s always heartwarming to know that it´s getting such a good reception, because people are seriously digging into the album and all the music in it, and are noticing that, with its pros and maybe it´s weakness, Rise From Chaos is not a regular album, it´s something different from most of the new albums nowadays, and that it´s really worthy to give it a chance to discover it.

Gonzalo: I never would have imagined that I'd be interviewed someday, so I could say it went better than I expected.

David: We aimed high with this release. The public and the industry sometimes aren't fair concerning the effort a band can display in a record, but we're proud to say that this time everyone seems to be completely freaking out with the album. It's very good news.

Hugo: We feel very good about the reception of the album.  During the recording sessions we endured a bad time: changes in the lineup, uncertainty about future… you know, and this is the best way to leave all of that behind.

Heavy, fast and aggressive combined with groove and melody is what I dig the most about Rise From Chaos and I was wondering: who comes up with that stuff, who brings the riffs and who does the melodies?? How does it work in Demonik?

David: Everybody is welcomed to create in Demonik but is Hugo most of the time the one who comes up with the idea of a new riff or a whole new song or an entire album! (Laughs) Everybody has very good ideas, but Hugo is more prolific.

Hugo: From the beginning, i have composed most of the songs for many reasons, but Víctor (lead guitar) also writes. Former members wrote both music and lyrics on previous albums. In this moment the "new" members David (vocals) and Gonzalo (bassist), are writing new music for the next album.

I would like to ask you about two songs in particular since they're my favorite. For starters could you tell me about "Voices From Hell". Was there anything that influenced you differently while composing this song, were there any nonmetal influences that surprised even yourself?

Hugo: "Voices From Hell" and "To Live" are the most ambitious songs in Demonik' s history. Talking about "Voices..." we wanted to expand our artistic limits, and the music marked out the path for the orchestral arrangements. The voice of May Lucas (female vocals guest appearance) take the song to other level. David (vocals) worked hard to give this song what it deserved. And again, you're right, this song has a nonmetal influence, the acoustic guitars give it other texture to our music.

It ended up being 24 minutes long, weren't you afraid of the length and people not getting it?

David: To be sincere, it was one of our biggest fears but surprisingly, people is accepting it quite well and we've received comments of fans telling us how much they love the song, as well as people from the press.

Hugo: Nowadays writing a lengthy song is always a risk but we wanted to do it anyways.

And there is "Insomnia" being 100% opposite. Tell me about that one.

Hugo: that is, that song comes from a personal need, the lyric is about suffering insomnia, so the music should be intense, dramatic but at the same time direct.

David: The concept is quite different as it represents the suffering of an illness and has to transmit an unpleasant and twisted atmosphere. That's what we intended with the music video.

How did you arrive at the decision to record not one but three lengthy songs on your second album?

Victor: It wasn´t a planned decision. At the end of the writing process, we had eight songs, all of them different from the others, in feel, structures, sense, tempo and length. We knew that Voices From Hell and To Live could be a bit challenging for some people to listen, maybe for those fans expecting a fast, straightforward thrash metal dose from the beginning to the end of the record. But we didn´t thought of Legion as a "lengthy" track, we took it instead as a Thrash track with plenty of riffs and instrumental sections to enjoy.

Hugo: We didn't think about it, when we write we don't focus on the length, only in if the song works.

Is taking creative risks something, you enjoy as a band, are you planning on doing something like that for next album?

Victor: Trying to beat yourself as a songwriter and musician is something really enjoyable, as well as the feeling of achieving it. And it´s also something natural not only in the development of a musician, but in the development of a music fan, to keep faithful to your musical roots while exploring new influences and trying to push your boundaries. In that sense, we know what the roots of our music are, and we know they are not going to change, but it´s also clear to us that we love to beat ourselves and push our music to new levels in every record.

David: Experimenting and pushing away musical boundaries is always exciting as a band and as individuals. The key is always to maintain a certain balance between what you wanna do and what you've done. We'll see how hard we can surprise you in the next record. Wait for it.

Hugo: Yes, of course. When we started to write this album, we wanted to take artistic risks as we needed to grow as musicians.

Album sounds really good, so congrats on a job well done. Are you guys working together on everything or is there a leader/dictator that decides on everything?

Gonzalo: Everything is consensual by all of us and all are allowed to share ideas, riffs, "brush strokes" of a new lyric… it doesn't matter if it really makes you bang your head or blow up your mind. In my opinion, the mix of ideas and influences keeps the music alive.

David: There is no dictator, but in some areas or matters, a member can act as a filter to get out the most of a situation, carrying a single activity or directing the rest.

Hugo: No, all members have voice and vote in the decision-making process of the band.

How long did you work on new album?

Hugo: Five years or so. Two years of writing and three to finish the record phase.

Can you tell us about it, about the recording itself, and how satisfied are you with the outcome?

David: For me it was quite exciting as it was my first professional recording ever. The process was hard as all the vocals were recorded within 3 days but in the end all the effort paid off and we can say it's the best produced album of Demonik.

Hugo: It was hard, we went to the studio intermittently and that made it an exasperating process.

Victor: This album has been by far the most difficult to record in the history of the band, as the recording process wasn´t conventional at all. Guitars and bass were tracked between December 2015 and January 2016. Then we recorded the drum tracks with the almighty Dani Perez during April 2016, and finally, due to the changes in the lineup of the band, vocal tracks were recorded in April 2017. So, as you can see, it's been a long and complex process, but it was worthy since the outcome it´s absolutely astonishing and by far much better than we expected.

Your music video must have been fun to record. Who did you work with on the shoot, how was the process of putting it together, anything funny/unusual happened?

David: We worked with Ix Valieri and Studios V to carry out the idea Hugo had in mind for the video, it was quite an experience and we had lots of laughs, especially with certain scenes. Also working with the main actor, Carlos Puertas, is always a blast.

Hugo: My girlfriend suggested that recreating Francisco De Goya's black paintings would be a great idea for Demonik' s universe. And yes, it was fun, but the shooting took a long time to prepare.

Band formed around 2007 and line-up seems to be everchanging since. It's March 2019. What is the drummer situation right now?

David: Currently we're working with an ex member of the band, Jose Andrés Rodriguez as a session member. After the tour we'll be taking applications for the drumming action.

Hugo: Jose A. Rodriguez (co-founder of the band along with me) is back to the band for the whole new tour. When we find the right person, Demonik will have a new official member.

Who's in the band right now, how long have you played together with current crew?

If my memory doesn't fail, I think that I joined on September 2017, and I was the last member to join.

That's all I got. Good luck in the future Demonik!! Last words?

Gonzalo: See you in the road!

David: follow us in our social networks to keep up to date with news, tours, concerts and more. Also keep increasing those views in Insomnia's music video and prepare for what's about to come!

Hugo: Thank you Tomek and Metalbite for making us our first interview for the USA. We hope American people to listen and enjoy our music.