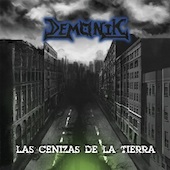 Thrash is alive and kicking at this time, after it had vanished suddenly (except for the Big Four and other few bands) once grunge reared its ugly and untalented head. Now there is a small, but growing thrash scene all across out globe – and it is getting better and better with each band that picks up the flag.

Spain based Demonik takes its cues mainly from the likes of Metallica, Pantera and even some Iron Maiden. They are furious, fast and at times… a little scattered. They seem to know their instruments but lack both in creativity and originality. They are good, but come across like a Metallica cover band trying to write stuff for the first time. The results are pretty horrid.

Over the eight songs you are given you get a feeling like they ‘borrowed’ most of the riffs without ever even trying to change them. The result is an album that is predictable, dated and undeniably uninspired. Only the instrumental track on the album ("Existir") is closest to being a good song, but it still feels stiff without any power.

It is sad about Demonik, a band who seems to want to be an amazing act that in reality is not even a very good cover band. I hear a bit of talent lurking somewhere in the characterless drivel that occupies this CD but it is out of view for most. Hope they find their sound soon and give up this one to whoever is dumb enough to want it.