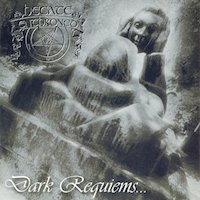 “For Thee, in Sinful Obscurity” – why did nobody tell Hecate Enthroned that it is not very clever to give even the interludes titles that seemed to be written by the pen of a filthy Dani for the first time? Okay, we all know that the dudes always stood and still stand in the shadow of the famous and infamous circus that Dani steers through all ups and downs, but it is a self-chosen fate as long as you do not only play a similar style, but also follow a comparable lyrical approach. Anyway, let’s come to the music of Dark Requiems….

The atmospheric intro sets the stage and “The Pagan Swords of Legend” comes in vehemently. An opener (or, more precise, the first regular track) should always be able to pull the listener into the album in a matter of minutes and the here presented track meets this expectation with great ease. It relies on strong melodies that symbolize drama and strength simultaneously. The very dense sound has two effects. It marks the foundation for an intensive listening session, but the full-length also suffers from a slightly ill-defined mix. Clarity was written in very small letters during the recordings and maybe I should not be that picky, but I would almost like to speak of a lumpy mix. Nevertheless, the album is kicked off in a competent way. I admit that I do not understand a single word of the vocals, they sound pretty inhuman and distorted. But if I want to become familiar with the lyrical details, I know who I have to ask (Dani Filth).

Hecate Enthroned do not fear complexity and most parts blend seamlessly with the next one. Abruptly occurring breaks have no place on this album. Its flow is free from fractures, the tempo shifts make sense (the band presents a broad range from mid-paced rhythms to very fast eruptions) and the homogeneous song-writing results in a stringent overall picture. This is not to say that all is gold here. A less prominent appearance of the keyboards would have been fine. Sometimes the dude at the keys makes more noise than his two companions at the guitars and this mismatch weakens the power of the material. No doubt, most melodies work pretty good or even excellent, but I am a cantankerous purist in this context; I always want the guitars in the front row. My personal sensitivities aside, the sextet performs an almost glamourous type of black metal. I guess this is the kind of black metal that bored baronesses would have preferred in the 17th century if they would have had the chance to do so. Okay, this sounds too negative. In other words: this is black metal I want to consume while sitting on an oaken throne in a medieval castle (with a working heater, please). My functionally furnished living room does not match the more or less pompous style of the full-length.

Honestly speaking, there are no outstanding songs after the aforementioned “The Pagan Swords of Legend”, but this can be understood as a compliment. The band offers a permanently high-quality level and in view of its good ideas, it’s nearly a tragedy that the group did not strive for a more autonomous way of proceeding. However, Dani and – to make things complete – Dimmu Borgir have definitely released less strong works than Dark Requiems…. It’s an album that needs a certain period to reveal its full aroma, but it has depth and musicality. 22 years after its release, it is still a good idea to listen to it every now and then. Even dirty Dani probably agrees.