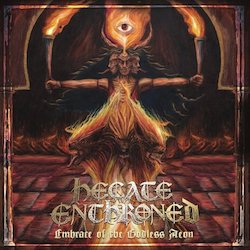 It seems that nowadays it's quite long for a band not to release any album over 6 years. When I heard about the new Hecate Enthroned I was sure I must have missed an album or two since they released Virulent Rapture. But I haven't. And this is different Hecate Enthroned, with new vocalist, Joe Stamp. Very good addition to the band.

Basically if any of you are missing the feeling of your first black metal album in the mid-90s, grab this and you won't be dissapointed. This is the old-school Cradle of Filth mixed with old-school Emperor and some special touch that makes this album something unique, including Sarah Jezebel Deva in several tracks ("Goddess of Dark Misfits", "Silent Conversations with Distant Stars" and "Erebus and Terror") and amazing keyboards played by Pete White.

I know that probably comparing them to Cradle of Filth was not always used to compliment this band, but this time it actually is. Cradle of Filth probably wish they could record such album. As I was enjoying the revival of old-school Swedish death metal in form of LIK for example, now Hecate Enthroned shows us that the revival of old-school symphonic black metal is also possible. It's something Cradle of Filth are playing only when they are performing their old tracks. Hecate Enthroned shows that you can remain within that sub genre and yet create something fresh. With furious drums and fast chords. And some more silent passages that build up into epic mixture of death metal with black metal, British style. And I like that apart from typical black metal shrieks you can hear some good growling here. And it has enough melody to keep me engaged from the beginning to the end.

So far my favorite track is "Enthrallment", sixth number on this list. Very interesting position this year and released in January. Not sure if any other position this year will be able to top this album. These guys are not new to this scene and they know what they're doing.

Obviously, if old-school, it has to have a proper intro. And "Revelations in Autumn Flame" comes in with basically black metal passage, followed by more death metal passage and then the song carries on mixing these two, really good track as well. If you're into Sarah Jezebel Deva's voice, I can strongly recommend "Goddess of Dark Misfits", but she also does good job with over 9-minutes-long "Erebus and Terror", really good track to close the album. And as the album is on your speakers at least 3 times, each and every next listen gets better, you notice the construction of each track and start enjoying those little elements that make is a really good listen from the start to the end.

My explanation for not giving it full 10? Only 3 tracks with Sarah Jezebel Deva.

Thanks for Kelly Liza Cronje for inspiration.