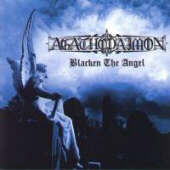 Open the vault of German black metal and maybe you stumble over Agathodaimon’s first work from 1998. The stylish artwork has a gothic touch and I am sorry to inform you that the picture does not lie. The keyboards play a relatively important role, many parts are rather emotional than furious, and the sound suffers a tad from its polished (and sometimes very thin) appearance. To avoid misunderstandings, I am not generally against keyboards or atmosphere in black metal. The intermezzo “Contemplation Song” demonstrates that one can create a very doomy mood while making good use of keyboards (and percussion) without violating the rules of the subgenre. However, Blacken the Angel falls victim to an overdose of lukewarm, melodic and finally meaningless parts. Its cardinal sin is called “Near Dark”, a song with a length of more than 15 minutes and a substance for less than two minutes. An endless stream of tones that babble along lightly – if you belong to the happier ones you will fall asleep after three minutes. This song with its monumental configuration and its minimal effect is not only a flop in itself. It also hurts the flow of the entire work significantly.

Blacken the Angel is full of tragic sequences, but the greatest tragedy is that the band was definitely able to write outstanding black metal – but due to whatever reason, the dudes show it just one time. “Banner of Blasphemy” does not only take the crown in the context of the debut’s remaining material. It is among the best songs that Germany has ever spawned in terms of black metal. A menacing opening, a riff that crawls nearer and nearer like a malicious reptile, a spooky voice that caws Romanian lyrics while going insane, tempo explosions and an apocalyptic ending – these are some of the fascinating ingredients of this jewel. An excellent number with a perfect mixture of atmosphere and fighting strength – can anybody tell me why they did not permanently put the focus on this absolutely convincing approach? The seventh track seems to walk the same path, but it cannot keep the course after a promising riff at the beginning. A keyboard-dominated sequence sets in and leads the sing into nothingness.

Generally speaking, the majority of the songs lacks compactness. The tracks are overlong and tiring, thrilling sections rather remain the exception. Even the melancholic opener, actually a good number with a certain depth, could have been shortened to six or (with a great deal of good will) seven minutes. Nevertheless, it holds some intense and strong parts, especially in the center of the song which follows the from-soft-to-harsh-to-soft-again construction. Fortunately, this track avoids cheesy sections. Too bad that many other tunes lie in close proximity to schmaltzy regions. Even the genre-typical voice cannot prevent that Agathodaimon only deliver a light version of black metal. Hence it is not surprising that the album (and the band) has fallen into oblivion, even though songs like “Ill of an Imaginery Gift” or “Die Nacht des Unwesens” deliver a serviceable exhibit of black metal. Too little, too late. Despite the technical competence of Agathodaimon, the split of the band did not leave a big wound in the skin of the German or even global black metal scene.