After making big waves in the black metal community with their first two releases, Agathodaimon was ready to take on a challenge by delivering their best work to date with their 3rd album simply titled "Chapter III". To make it even more difficult, for the first time the band worked without their main songwriter Vlad who couldn't leave Romania in time for the recording. Improved songwriting, interesting arrangements and captivating touches of different styles resulted in very mature material that still maintains its back metal roots but with a more gothic, atmospheric feel. Guitarist Sathonys speaks about the new record, the situation with Vlad and black metal in general.

Many people, press thinks that 3rd release is the most important one in a young band's career. Did you think about it writing the new material?

Actually, It was kind of a running game when we wrote the material even our manager kept reminding us about it... We always try to write the best material at the time we write it. We always try to give our best therefore it wasn't anything special concerning the song writing process this time than it was in the past.

How long did you write all the material cause it seems that with so many different styles and emotions it took few months and different moods?

The songs that we used for this album were written since the departure of our Romanian vocalist (Vlad). After we recorded our second demo we tend to leave it for few weeks to our friends and relatives to listen to before any further development but he wasn't allowed to leave Romania afterwards, so the material featured on this album, the main ideas and basic roots of melodies was already written in 97. So, it was a long period of time since we started writing material for this album.

To get the feel of your influences can you tell as what's spinning in your player right now?

Most of the stuff I listen to nowadays is very far away from the style we play... let's see... Alice In Chains, I'm very big fan of them. The Doors a lot in the past and of course some typical metal stuff... old death metal bands from Scandinavia like Entombed, Unleashed, Grave... From States Morbid Angel, Slayer, Megadeth. Some black metal like Immortal...

How did the writing process look like? Are all band members involved in it?

Yes, it was the first time that all the members of the band were involved... of course except our Romanian vocalist. As I mentioned earlier, we wrote all the songs without him because on our last album we more or less were forced to improvise a lot because the core of the band, all German members, flew to Bucharest, Romania's capital to record everything there cause our main goal was to work with our Romanian vocalist. We were aware of the fact that Romanian studio couldn't stand to the type of production a band can get in studios like Abyss but we were satisfied with the final sound of it. For this album we decided to focus on good production, good sound and also on the songwriting process without improvising too much. We took our time for good pre-production, arrangements and stuff like that.

Actually, I hope you'll never go to Romania to record your albums again unless they upgrade their equipment. The sound difference is almost indescribable between your last two albums. Wasn't it the main reason you didn't go there this time around?

[laughs] In the past we used to have Vlad as a main influence on our songwriting. He took care of many songs in the past and he was so to say the main songwriter because he also took care of the lyrics. On the new album we thought we should give a try and finally unleash the stuff that we were doing since his departure. It took as a while to decide whether it would be a good idea or not but we had a good pre-production as I said and we tested our new songs on few people without telling them that Vlad wouldn't be featured in a recording line up and everyone seemed to like it. After that we felt kind of relieved and had some insurance so to say that songs will be interested enough to be actually released without his participation. 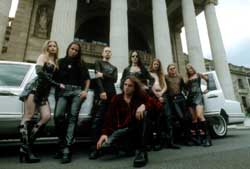 Is Vlad than still a member? He's still mentioned as a part of the band?

It's a first album that he wasn't really involved but he's still a member of the band and we hope to have him on our next tour again. It seems like next year there are going to be some changes concerning the immigrants and people who want to visit the countries of the Europeans Union. In the past he was allowed to go for one month a year only and of course this is not a good working situation when you try to work together on some songs and from what I've heard starting next year it's going to be much easier for people outside the Union to come here and stay longer.

So, who wrote all the lyrics since the main poet Vlad, was not a part of this recording?

This time in most cases the person who did the most songwriting was responsible for the lyrics. This way it assured the unity between music and lyric... Akaias, Hyperion and I wrote most of them.

What is the general context of them?

When you'll actually have the booklet with the lyrics it will be quite easy to see that everyone who contributed to them had its own style of writing them. For example our guitarist Hyperion wrote very personal lyrics concerning his views on society, moral, religion and stuff like that while Akaias tends to rather focus on traditional black metal style. As far as my lyrics, they're also very personal but I tried to write them the way our Romanian vocalist Vlad did in the past. I wanted to preserve this line between our last album and "Chapter III" at least as far as lyrics go.

Does "Chapter III" mean something more than just a title of your 3rd release?

In the beginning when we were thinking of how to get Vlad to Germany to actually work on the songs we had a working title called "Architectua to Apocalypse" (or insert whatever you want here I don't understand Romanian) which is Romanian for "The Architecture of the Apocalypse" or something like that but at the end all the songs were very different from each other and they stand out for itself therefore we wanted to give the title a very neutral feeling and that's why we picked "Chapter III".

It seems like on "Chapter III" you let go the black metal tag and did whatever you wanted. Almost each song is different and not always sounding blackish... Was that the part of the plan?

Somehow... Since our demo we wanted to keep our black metal roots but still be able to experiment and try to find a way to widen our musical horizon and write songs that are not really black metal but have certain black metal atmosphere connected to them. We don't label ourselves black metal we just try to create some dark, atmospheric, emotional music or whatever you'll call it. That's our main goal.

What do you think of the reaction of "true black metal" fans to your new album if you even care about it?

So far I didn't get any hate or life threatening mail [laughs]... well, all this started when we signed the deal with Nuclear Blast. There were some people that said we betrayed the underground and black metal scene, we are commercial band now and stuff like this but we never label ourselves as black metal to start with. We like black metal and we think that this is the most intense music style but we also think that this style should be open to any experiments and should be open to any outside ideas too otherwise every band would sound this same and they would just repeat themselves over and over again. 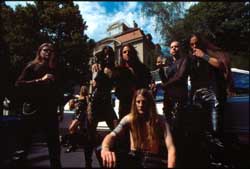 How do you rate today's black metal scene and what do you think of the break up of one of its leaders Emperor?

I have mixed feeling...their first album, "In The Nightside Eclipse" was and still is some kind of a milestone for black metal scene. I still think it's the most outstanding Norwegian black metal album until today and it can't be compared to the stuff they're doing nowadays or stuff they did on their last album. I mean they really developed as songwriters and musicians but the feeling they were able to present on their debut they couldn't reach with their next releases. "Anthems To The Welkin At Dusk" was a really great album with some really great songs but it didn't have this same strong feeling for me as their first release and this same was with the albums that came afterwards but it's always a matter of taste. We have a lot of sympathy for that band because they had this same kind of approach to evolution of the band that we have.

Is Agathodaimon a main band for all the members and do they still play in side projects?

For almost all of us Agathodaimon is the main band. Our German vocalist Akaias has another band called Asaru, which hasn't released an album just a demo, but this is rather his main band. He takes Agathodaimon very seriously too but he's very busy working with his other band because he plays guitar there and he's their main songwriter.

Are you satisfied with support and promotion of your band you have received from Nuclear Blast so far?

Yeah, but of course I can't compare it to the things they're doing to their A class bands like Dimmu Borgir or HammerFall. When I look at the way we're treated and the support we get I'm very happy with Nuclear Blast. Of course there are days you think it could be more of this or that but you have to understand them too. If let's say Immortal will sell 4-5 times more albums then Agathodaimon then no wonder they'll spend more money on their advertisement. So, we are very satisfied with their promotion and I would sign to any other label at the moment.

As always I want to thank to all the people that supported us in the past and for anyone interested in our music I'd like to invite you to our web site www.agathodaimon.de to check free samples of our music. And last but not least I'd like to thank you very much for your support and wish you all the best in the future.