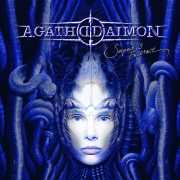 Agathodaimon always disappointed me. They've consistently displayed impressive musicianship on every album. They've written interesting riffs throughout the last eight years. They manage one or two brilliant compositions on every CD. So why, after four full-length studio recordings, can't they make a complete album that doesn't turn out sounding utterly generic?

Perhaps I'm not being fair. This sounds like In Flames quite a bit, as well, particularly Clayman-era, so it's not just ripping off black metal. While a better influence than the last Cradle of Filth CD, the Agathodaimon sound now alternates between interesting, epic black metal, and Swedish death. In a way, that's an improvement; their black metal musicianship is getting better. However, it's interspersed with crap stolen from Dark Tranquility's cutting room floor. The end result is that, much like Chapter III and Higher Art of Rebellion, several songs end up sounding completely contrived.

Mind you, this is not a bad CD. It's not exceptional by any means, but it's well-produced, well played, and has incredible moments. In fact, the last four songs are all an exceptional mixture of epic black metal and Swedish death, the sort of thing that I'd always hoped for from Agathodaimon.

On the other hand, there's the first six. They're consistently terrible. The opener, "Cellos for the Insatiable," is a wretched failure of melodic metal. "Solitude" could induce nausea even in bands such as Dimmu Borgir and Borknagar, and could be a Switchblade Symphony cover if the singer's voice got any more annoying. Unfortunately, that's 60% of the album; by the time listeners reach the album's much-improved conclusion, they're either expecting a completely different, far less enthusiastic playing style, or so annoyed that they've stopped paying any attention to it.

Perhaps, sometime in the distant future, Agathodaimon will develop their own sound, and cease to be one of black metal's countless interchangeable supporting members. Unfotrunately, despite a couple of impressive efforts, Serpent's Embrace isn't there.