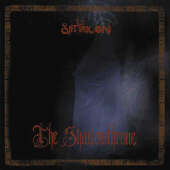 The Shadowthrone was released twelve months after the debut. It’s not just the afterburner of Dark Medieval Times, but it is also not too far away in terms of style and melodies. However, the output from 1994 shows a more homogeneous picture. This is mainly due to the fact that there are a lot of pure metal parts, significantly more than on the first album. Satyr and his frosty companion present still complex but accessible songs that have a good flow, but the mastermind did not integrate many atmospheric parts. This does not mean that the album lacks an atmospheric aroma, but this time it is mainly created as a side effect. Instead, songs like the opener or 'In The Mist By The Hills' put the focus on mid-harsh black metal which is free from any kind of experiments. But don’t jump to conclusions, I am not saying that they suffer from a lack of variety. The vocals are sometimes demonic, sometimes solemn and always a bit eerie. The compositions boast with majestic melodies, strict and straight velocity outbursts and simple but effective details like the interspersed piano tones in the opener. Okay, a few parts occur which deliver rather ordinary or, to express it more positively, acceptable sounds and maybe two or three songs would have benefited from a shorter, more compact arrangement. Even worse, 'Vikingland' with its folklore touch and its vapid harmonies goes down the drain. But overall, Satyr paints a coherent picture.

What I find remarkable is that the duo performs a harsher style than on its debut. As is well known, this development culminated with the glorious and ferocious Nemesis Divina. Afterwards Satyricon went more and more into a dubious, less dogmatic, nearly egomanic direction. So it is only justified that their star began to fall after this classic. But let’s get back to The Shadowthrone which does not lack authenticty, neither then nor in hindsight. Moreover, it reflects the mentality, spirituality and origin of the band. The Norwegian note cannot be ignored, especially when some lines show up which could originate from Ancient’s debut album as well. Nevertheless, Satyricon still act autonomously on the basis of non-conformist, malicious thoughts. Even the production can claim to have a flavour of its own. The output does not roll over the listener with a massive wall of sound, but even the rather thin guitars develop an adequate feeling of downfall, misanthropy and isolation. Moreover, the sound is well balanced, the vocals are neither too loud nor in the background and so the mix of The Shadowthrone is not its enemy, but a component which contributes to the successful appearance of the record in its entity.

Although the album is less heterogeneous than its predecessor with regard to the stylish approach, its single songs deliver greater ups and downs in terms of quality. 'Dominions Of Satyricon' houses some parts that resonate for a long time and the two songs at the beginning justify their exposed position. On the other hand, I mentioned already 'Vikingland' and the ambient 'I En Cvart Kiste' also fails to add significant value. It’s just there… but I don’t want to be too picky with a closer. In total, the historical significance of The Shadowthrone is to be rated higher than the music itself, which I like well, but has not unhinged my musical world either. However, just like Dark Medieval Times, the album can take you on a trip back to Norway in the mid-nienties of the last century. That alone is pleasant.