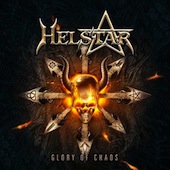 After the tremendously awesome The King of Hell, Helstar waste no time and return to the studio. Having been away from the scene for a good 20 years, Helstar is now a rabid animal, fiercer than before, hungry as ever.

And with this album, they hold no punches. Every member s parameter is set to only one thing – destroy. Unleash hell and take no prisoners. And if you’re even remotely familiar with Helstar, you’ll know damn well that it’s quite a dangerous thing to see these guys so determined. With this album, the motivation and passion are ever present, and it’s just heads down thrash metal.

“Angels Fall to Hell” delivers the first strike. Subtlety? These guys don’t know the meaning of the word. After a pace building intro, the boys from Texas unleash all hell. After the first lead, the songs explode with a massive thrash riff which sets the tone for the rest of the album and gives us the first real taste of the mix and production. The mix is very well done, everything can be heard nice and clear, not to mention fucking loud. Guitars are beefier than ever, drums sound great, bass is auditable if you listen for it, and James’ vocals are laid out on the perfect level above everything else.

Speaking of James, this is probably his best performance, ever. He’s managed to really just annihilate all of his other previous performances. On this album, he does pretty much everything a metal vocalist does, except only far better than most. His voice has matured over time, yet he can still hit those high notes like no one’s business. He also delivers some downright intense, black metal type vocals on “Alma Negra”, which was totally unexpected.

For me, Helstar is all about the riffs. There is just something about their style of writing riffs that just rings true to me. As I always say, they have the perfect balance of heaviness and groove to them, yet with always a touch of evil which they do so well. Larry Barragan and Rob Trevino sure as hell don’t hold back, that’s for sure. Riff after riff, lead after lead, it’s pretty relentless, yet fortunately it never gets tiring due to the masterful arranging skills of these two legends. They know when to go for the throat, and when to lay low a bit to give the listener some breathing space. Above a lot of other things, its Helstar’s level of arranging and use of dynamics which makes them so special. Take a listen to the masterful riffing on “Angels Fall to Hell”, “Monarch of Bloodshed”, “Bone Crusher”, “Dethrap” and “Alma Negra” – it’s enough riffage to feed a thrash fan for a few years!

Also, there never seems to be any of those moments where the flow of the record falls apart. Everything transitions into each other very smoothly, despite being so goddamn heavy. The rhythm section of Jerry Abarca and Mikey Lewis hold it down tight – and I mean tight. Lay on some amazing thrash riffs and the intense vocals of James Rivera and you have nothing but a full-fledged, onslaught of pure thrash metal.

Some may complain that it’s not like Nosferatu, and well, they’re right, though it’s certainly nothing to complain about. That was 20 years ago. You can’t expect a band to not evolve and change a bit over the years and adapt to the times. It’s a no-win situation – if you repeat the success of a classic album, you’ll get accused of repeating past glories. If you evolve and expand your horizons, you’ll be accused of not staying true to your past. Come on, what a load of fucking shit that is. The best thing to do in this situation is to do what Helstar did – turn everything up to 10 and play what you want. I bet they can’t hear you bitch and moan anyway, with how loud they are fucking playing.

To me, modern thrash does not get any better. If I had only one gripe about this album, it would be the guitar solos. This time around, they are just not as memorable as the riffs. They were absolutely flawless on The King of Hell, but here they seem to have taken a backseat somewhat. That’s not to say that there are no killer leads on this record – just listen to “Alma Negra” if you ever feel like having your face liquefied.