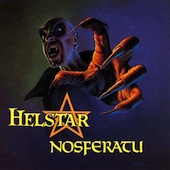 The metal world knows three different types of albums. Concept albums, where the songs are thematically connected, albums whose songs stand on their own and finally such works, where you can not recognize a concept in any way. They are just garbage and often Sabaton is written on them. But let's leave that and concentrate on Helstar. Back in 1989, they invented the fourth variation of a metal album. Nosferatu is a bastard of the first two alternatives, because the first half deals with the somewhat silly theme of "vampires", while the tracks of the second half deal with everything except vampires. By the way, Helstar were also very inventive in other respects and thus won the prize for the most wrong German title ever. 'Von Am Lebem Desto Strum' makes exactly zero comma zero sense. While the first four words exist after all (more or less...), "Strum" must be based on a vampiric inspiration. Anyway, Rainbow can't keep up with their equally clumsy "Vielleicht Das Nachster Zeit".

Rainbow is also a name that comes to mind when I hear the rather light-footed, inappropriately melodic instrumental 'Perseverance And Desperation'. The bright sounding guitars intoxicate themselves with their own harmonies until colleague Frank Ferreira intervenes with a miniature drum solo. But it's already too late, the piece puts an abrupt end behind the strong beginning of the disc. Helstar convince after the intro with three temperamental, powerful and straightforward up-tempo songs that lack no feature which traditionally conceived pieces should have. For instance, the choruses go well into the ear and especially that of 'Baptized In Blood' remains immediately in the memory. In contrast, the concept part of the album closes very mediocre with the semi-balladic, relatively bulky 'The Curse Has Passed Away'. At least, we got through the vampire songs without being bitten in the neck.

Unfortunately, Helstar only sporadically find back to the form of the first songs in the remaining ones as well. 'Swirling Madness' with its somewhat distorted chorus sounds fresh and snappy. 'Benediction' presents a promising riff at the beginning, but it gets lost in the course of the little intoxicating piece. Now it is undisputed that James Rivera is a good singer. He hits all the notes perfectly on Nosferatu as well. He can actually sing and not just scream, but that alone doesn't significantly enhance the songs either. Especially since his vocal charisma does not exceed a solid level. Thus it comes that the well, but not particularly pressure-full produced disc holds light and shadow and to the latter belong in my opinion also the again and again classically inspired guitar runs. A few additional, crunchy riffs would have been preferable to me and would have pushed the power metal work in a somewhat more thrashy direction. At least, in the minimalist booklet Helstar called for a boycott of good-looking music. That had to be said after all. Just like "Strum".