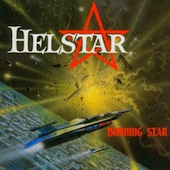 Let's get back in time. 1984: Ronald Reagan was the 40th President of the United States of America, nobody had ever heard of a place called Chernobyl so far and people who had been children at the end of World War II were as old as I am today. Shit, a long time is gone since 1984 and I guess I have to keep this in mind when it comes to the review of Burning Star. Helstar's debut has a lot of this charm of imperfection that characterizes the first moves into a new era. Speed and thrash metal were at the cusp of revolutionizing the entire metallic world and even though the guys from Texas did not play this style, there existed a kind of spiritual connection between their underground-compatible sound and that of Metallica or Anthrax. I doubt that Helstar would have become as big as the aforementioned formations with a rawer production of their debut, although James Rivera is of this opinion. However, I agree that the relatively harmless production did not help the album to get more famous, but this alone was not the reason for the significantly lower success of the guys from Texas.

Another reason was, at least from my point of view, the overdose of high-pitched screams of Rivera. Of course, he just followed the spirit of the time. But the zeitgeist is a whore and therefore his approach is pretty annoying ("Witch's Eye") sometimes. His screams torture my eardrums, because it happens quite often that they appear at the wrong moment. That's a pity, because his "normal" vocals don't lack individuality and I have no doubt that he was actually a good choice to fill the position of the front man in this combo. Helstar needed exactly a singer like Rivera who was able to add the final touch to their compositions which combined traditional metal with power metal elements. They were far away from the juvenile ruthlessness of those dudes with names like Hetfield, Holt or Mustaine. Unlike the debuts of Metallica or Exodus, Burning Star did not sound spectacular. But Helstar made an authentic offering with sometimes almost complex song structures and they had some fine guitar lines up their sleeves. Especially the title track proves evidence in this regard.

Even when considering the date of publication, the material sounds a little bit old-fashioned occasionally. "Towards the Unknown" has some pretty heavy sequences, but other parts, for example the beginning, could originate from a rock album of the seventies as well. A rather defensive riff kicks off the track and a guitar solo follow immediately with a pretty narcissistic touch. Honestly speaking, I prefer the heavy and profound guitars that open "Possession" or "Run with the Pack", a song that stands with both feet on the territory of pure power metal. Rivera offers his best performance here and leaves his mark in a convincing manner.

I cannot reconstruct or really imagine the effect that this full-length probably had in 1984. From today's perspective, it lacks dynamic and, to a lower extent, verve. Due to whatever reason, the record sounds as if the musicians did not press their whole enthusiasm for the music into the vinyl. Instead, they delivered a comparatively mature debut. Only a few parts fell victim to their inexperience. The chorus of "Leather and Lust", for instance, goes nowhere and has absolutely nothing to offer. But I wanted to keep in mind that this album was released a long time ago and the members of Helstar were debutants and pioneers at the same time. Given this situation, Burning Star was a good album without any kind of cheap gimmicks - and still it has its right of existence. By the way, the here reviewed edition holds the demo recording of the album as well.