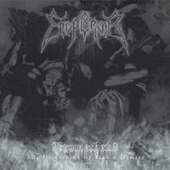 Type: Full-Length
Release Date: 2001
Label: Candlelight Records
Genre: Black, Orchestral, Symphonic
1 The Eruption
2 Depraved
3 Empty
4 The Prophet
5 The Tongue Of Fire
6 In The Wordless Chamber
7 Grey
8 He Who Sought The Fire
9 Thorns On My Grave

“Prometheus: The Discipline of Fire and Demise”; Emperor’s last hurrah at black metal infamy. No introduction is needed to such a metal juggernaught that these three boys are a part of. One point I strongly need to suggest in regard to listening to “Prometheus...” is that you should endeavour to listen without any expectations. I, myself was caught in the pitfall of contemplating whether it is more like “Anthems to the Welkin at Dusk” or “IX Equilibrium” and whether it lived up to both these albums. I think the biggest stumbling block people are going to encounter with this epic is the comparison to old Emperor, and this album is not “Anthems...”, “IX Equilibrium”, but rather a neo-Emperor.

Another resounding point that will be bought to forums around the black metal communities dotted around the world is whether “Prometheus...” is more like Peccatum’s “Amor Fati” or Zyklon’s “World Ov Worms”, when the apparent answer is cleanly neither. “Prometheus...” does not contain the classical embodiments that Peccatum tried hard to achieve, nor does it contain the bombastic guttural hybrid black/death surges that Zyklon were famed for.

On to “Prometheus...” then, amidst much success from Samoth/Trym’s Zyklon and Ihsahn’s Peccatum, one would certainly wonder, and I certainly did as to whether Emperor (as a collective) would put in a good effort with “Prometheus...”. The reason I say this is because Samoth, Trym and Ihsahn could put a poor showing in for the latest Emperor and still fall back onto Zyklon and Peccatum for their musical craft. Thankfully this is not the case, Emperor being the consummate professionals that they are, have dedicated themselves to their last CD.

“Prometheus...” is a slower, more brooding and calculating release that demands that you work for its affections, in comparison to past Emperor releases which were initially joyous but perhaps could not obtain enlightenment forever. Much orchestration is present throughout the whole album, which allows the record to touch a more calming vein than other black records, but “Prometheus...” still holds the terror and mayhem that Emperor are famous for (see ‘Thorns on My Grave’). Trym, after his beatings through Zyklon has never sounded better, perhaps even more furious than on the Zyklon debut. What is also pleasing to see is that the songwriting process is a culmination of Samoth and Ihsahn, rather than a dictatorship from experiences in Zyklon and Peccatum. Ihsahn’s vocal work is truly astonishing and he has finally reached the pinnacle in vocal work through many years of experimentation, this mixture is just right. Innovative guitar riffs abound, supported by beautiful and often serene keyboard cuts.

The best slice for me from “Prometheus...” would have to be ‘The Tongue of Fire’ for the epic proportions that this track embodies.

I guess the real question on everyone’s lips, rather than my incessant rambling, is whether “Prometheus...” is worth pursuing for consumption. Well the answer is an empirical yes! If you waded through many years of turbulent Empiric history, than this album is a necessity, even if it is not as enthralling initially as past Emperor highlights. Whether this is Emperor’s finest album is whole new can of worms.

Bottom Line: Enjoyment and satisfaction will be gained through trials and tribulation for “Prometheus...”, but once obtained, one will find it hard to stop. Like the 1000-year-old Emperor of Japan who died in the Yamato period of the Samurai, this Emperor is dead and buried.