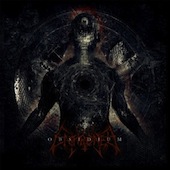 Bayern München is the most successful football club of my homeland and has won the German Bundesliga six times in a row. In the meantime, even some fans of this great club feel the wish that another team wins the championship, just to regain the feeling that the first place in the final ranking is no matter of course. And to bring this slightly weird analogy (sorry for that) to an end: Pentagrammaton was the full-length which made us clear that even the experienced dudes from Enthroned are not immune against ambivalent outputs. Okay, we knew this already since Armoured Bestial Hell, but I belong to this species of metal freaks who like to forget disappointing albums as soon as possible... Anyway, it is all the more gratifying that the homogeneous and well produced Obsidium appears as the revenge. The Belgian institution has regained its punchy, charismatic and merciless approach that entitles them to challenge their genre-immanent competitors.

There can be no doubt that the original line-up of Enthroned was highly influenced by the Scandinavian black metal explosion and Obsidium goes a step back to the roots of the formation. Large-sized leads - enjoy the quasi-title track "Nonvs Sacramentvm - Obsidium" or "Petraolevm Saliva" in this context - open the gates to dark panoramas without neglecting the necessary amount of pressure. The leads of "Horns Aflame" also summon the spirit of the old days. And needless to say, the guitars profit from a competent support. Garghuf, the dark creature behind the kit, contributes a lot of fiercely hammering parts, but his drumming never drowns in stupidity. With that said, you know the first crucial difference between Pentagrammaton and Obsidium. But there are more significant changes. Especially the production is much better than that of the predecessor. It is sharper, better balanced and more lethal. Enthroned have learned from the past. Pentagrammaton was no fiasco, but it left room for improvement and the quartet was able to identify and fill that room. Thus, they swing the black metal axes with great success and it is an ironic twist of fate that many of their influential role models, in particular the Norwegian ones, have dropped like flies during the last two decades - but Enthroned are still standing. Regardless of their numerous line-up changes, they neither lack stamina nor conviction. Not only because of this parallel, the dudes from Brussels can be compared with Marduk.

The leads have the same "Mardukian" mix of brutality (90%) and melody (10%), the commanding vocals express hostility and destruction. Every now and then, unholy background choirs show up and add a gloomy touch. But the dominating feature of Obsidium is its violent vehemence, the massiveness of compositions like "Deathmoor". Its neighbor, "Oblivious Shades", starts almost melancholic, but it does not take long until the guys give full speed ahead again. Some brief blast beats section destroys any enemy, but even during the fastest moments, the band does not forget to integrate some fine, effective guitar leads. In my opinion, the songs are more meticulously designed than those of Pentagrammaton, because I find more interesting details here. A little bit problematic is the fact that one or two absolutely outstanding tracks are missing, but the entire album grows with each new round. In addition, the material avoids an overdose of breaks as well as repetitiveness and the songs have a good flow. The general quality level is high and so the whole longplayer scores with stability and substance. No doubt, Obsidium is a very professional work - but this also means that the juvenile naivety, which played a part during the recordings of the fascinating debut, does not reappear. We cannot have it all... Long story short, Obsidium gives a meaning to the underperformance of Pentagrammaton. Hopefully I see a sense in the recent underperformances of Bayern München as well.