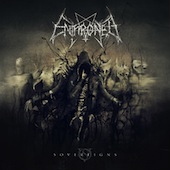 The Atomium stands in Brussels. It depicts iron atoms in the shape of the body-centered cubic unit cell of an iron crystal, magnified with the nearly insignificant factor of 165 billion. Enthroned also orginate from the Belgian capital. Compared with the impressive and unique landmark building, the black metal institution is slightly less known. But I think this state will change very soon, because albums like Sovereigns are predestined for pushing the band on the next level.

Generally speaking, this full-length can be considered as a typical work of Enthroned. It spreads the message of darkness while mixing brutality and viciousness. A few numbers of feeble sections, for example a totally lame and faceless part in the middle of the fourth track, are a tad annoying, but they remain exceptional and do by far not spoil the entire album. Its voodoo-esque intro appears pretty average, but already the siren-like leads of "Sine Qua Non", the first regular demolition ball, has these apocalyptic vibes that have made the black sub-genre so successful. The wailing leads of the fourth number are impressive as well, but, as mentioned before, a very strong, dense and powerful instrumental section leads to an intermezzo with almost dreamful guitars and strange, gnome-like vocals. However, already "Of Shrines and Sovereigns", the next track on the list, shows the real strengths of the Belgians: machine gun drums, expressive, sinister vocals, powering guitars. The spiritual background choirs during the mid-part add an occult touch. That's exactly the kind of Enthroned that I like.

Sovereigns does not glitter with an immaculate production, because its sound is a little bit dull. The guitars are vigorous but compared with some flawless productions of bands such as Marduk or Necrophobic, they do not achieve the maximum level of violence. Nevertheless, no fan of black metal will turn her or his back on this work. The technical side of Sovereigns meets more or less the international standards, although it cannot be described as perfect. And, as always, the songs themselves are of greater relevance and the exciting flow of "Divine Coagulation" shows that Enthroned still know how to forge a murderous blade of steel. They avoid experiments as well as an overdose of complexity. Moreover, they have closed their innovation department, but honestly said, I do not miss anything. Within the boundaries of the genre, Enthroned offer the whole spectrum from hailstorm to meditation - and I like it. The omnipresent blackness, the many vehement sections and the good compositional skills of the dark legion satisfy my needs completely.

Okay, maybe I was too optimistic concerning the question whether Enthroned are able to become more popular than the Atomium. But one thing is for sure: the Atomium consists mainly of nine atoms, but Sovereign is already the tenth full-length of Enthroned. Take that, Atomium!

More than twenty years building the scene, 10 great full lengths, live album, some EP's and few splits should be proof enough to anybody that Belgium's Enthroned are alive and well. Their newest album Sovereigns is going to be mentioned many times during 2014 and it will end up on many Year's Best, I’m sure of it. If any of you out there still don't know it, I recommend asking your neighbor for a slap in the face with his shovel for a wake up effect and then a quick purchase of the album because you'll need to listen to some good black metal while your face goes back to normal.

Here’s what you can expect. Album starts with an evil sounding intro and then all hell breaks loose. Enthroned attacks with a fury and sulphur to erase all non believers from their path with viciously blasting insanity. Sovereigns bursts with speed and intensity that remind me at moments of Marduk, just to move into soaring riffs that Satyricon accustomed us to, and then there are depressing passages that Forgotten Tombs creates. None of it obvious and all of it mixed with some wicked, malicious sounding intros and passages. Drumming moving with the speed of light and malevolent vocals are completing the picture of this blood thirsty monstrous beast.

Enthroned created album that raises the standards for smart and entertaining black metal. Superbly recorded, mixed and mastered they give us an album that is pure pleasure to listen to and dissect. I feel very affectionate about what they did here and I recommend that one to fans of well recorded and thought-out black metal. If forest recordings, Viking songs or such things are your thing - you must look elsewhere.