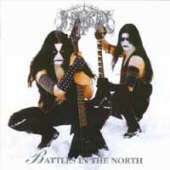 Type: Full-Length
Release Date: 1995
Label: Osmose Productions
Genre: Black
1 Battles In The North
2 Grim And Frostbitten Kingdoms
3 Descent Into Eminent Silence
4 Throned By Blackstorms
5 Moonrise Fields Of Sorrow
6 Cursed Realms Of The Winterdemons
7 At The Stormy Gates Of Mist
8 Through The Halls Of Eternity
9 Circling Above In Time Before Time
10 Blashyrkh (Mighty Ravendark)

Immortal's reputation has always been one of leaders and not followers. While never quite caring to expand their musical vision beyond traditional black metal like fellow Norwegians Emperor, Satyricon, and Dimmu Borgir, they are still considered one of the genre's most important and influential bands ever, and it is usually for that very reason. To me, Immortal and Marduk and Dark Funeral are the "true" black metal bands (though I greatly despise that term). Darkthrone, who hold that title very dear, actually hurt the name as they are a very weak band musically. Immortal and their fellows adopted the concept of no synths, no production, no fun, and still churned out fast, technical, mindblowing black metal!

Now those three words are suffice to describe the whole album. This is a violent marriage of Demonaz's expert guitar riffs and Abbath's inhumanly fast and technical drumwork. The sound is dominated by the monotone guitar but the riffs are complex and evolve quickly so you never get bored. Melody is generally rare but on the final two tracks the brothers prove they have no trouble in conjuring a few good notes to fit the song's mood and create a dismal and sad atmosphere. On the whole album Immortal show genuine potential and aspiration to create long black metal epics but they haven't quite grasped the true formula just yet.

Now my one gripe here, as with most other black metal, is the vocals and, to a lesser extent, the absurd lyrics. The singing is a weak and annoying croak that had to be turned up a hundred times in the mixing room in order to be heard over the dominant guitars, and then ended up too loud in the result. And the lyrics... well, aside being well known as black metal masters, Immortal are also quite famous for their childishly evil lyrics that contain enough grammatical errors to give an elementary teacher a heart attack. The words are generic and boring but the fact that I get a chuckle from glancing at them is a sure bonus! A magazine I once read worded it perfectly, "Bad Grammar = True!"