Immortal's "Sons of Northern Darkness" already marks the 7th album from these mighty black metalers and with all the respect to their previous work it blows its predecessors out of the sky and water, or Northern Waves for that matter. Each triumphant and victorious track leaves a permanent mark on the brain and yanks the knees closer to the floor. Every spin of this CD makes me more proud to be a metalhead and increases my cravings for their next masterpiece... but before that time I'll know every stroke of the guitars, every drum beat and every word and scream that left Abbath's gut. Maybe "Sons of Northern Darkness" it's not your national hymn yet, but it's a hymn of the new millennium, so make sure you know it too. Although all questions were prepared for Abbath, Iscariah handled them with ease and gave me all info I was looking for and more. 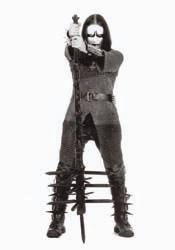 To describe your latest release I have only one word: perfect. Which brings me to an unfair question; do you think that you can top this with your next album?

Hmm... I don't even want to think about it yet. [laughs] We were thinking about that after the "Damned In Black" album; are we going to top that? But it worked, I'd say we topped that. We'll see what the future brings...

Over the last few albums you started to include more and more elements from different genres of metal which ultimately lead you to "Sons of Northern Darkness" which has black metal roots but it's hard to call it a "true" black metal album anymore. Was it a natural progression of the band or did fading popularity of this genre have anything to do with your decision?

When we wrote the album we didn't have any clue as to what we should do because we didn't sit down and say what's popular in music scene, what sells or whatever, we just started writing music from our hearts. We just made music the way we feel it, it's not planned or anything like that. As far as not being black metal, the reason for this is that we don't listen to black metal only so our musical inspirations varies. We still listen to a lot of music from 80s, thrash, metal but our roots are still in black metal.

Do you still listen to the first Immortal releases? Are you still proud of what the band did 10 years ago or is it a closed chapter in the bands life now?

No, no, no. We always listen to our old albums. Those old albums are very special to us they have this special atmosphere; it's the band's history, they show our revolution part and our evolution as well, without them we would not be here today. 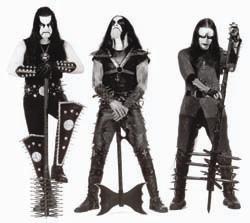 I'm sure you talk about this as a band... When Immortal started in early 90s have you guys ever thought that Immortal would achieve such a prestige status as it has right now?

I asked Abbath about this and he said not in his wildest imagination this band could become what it is today. He told me once that after giving the first show he said "that's it fuck it, let's break up the band, it's all I wanted to do" [laughs] and look now, 10 years later we're here, I'm talking to you about our new album... but at that time no one even dreamed about it. In general, nobody ever thought that black metal could reach such a high popularity anyway and from that point nothing surprises me anymore.

Since you mentioned the break up, is there anything that could break up Immortal right now?

Well... I don't think so. We don't feel that at least. We don't care about trends and stuff like that; we do this for ourselves and sales and all that just comes along as the bonus. We don't fear the future. We are really very optimistic about it.

Over the last couple of weeks while I was listening to your new album I got the feeling that "Sons of Northern Darkness" with its epic, hymn-like sound to it, is not about metal styles or genres anymore this album is a hymn to metal in general? How far am I off from your concept of your latest release?

I agree with you here. It has a very triumphant and victorious feel to it. There're a lot of atmospheric parts on this album that we felt they haven't been used very much in the past, for example song 'Beyond the North Waves' has those new elements. We are total metal fans we listen to all kinds of metal... almost, except power metal [laughs] and that's why there's something for everyone on this album, I think.

Where did the inspiration come from to write such a momentous, epic album?

I don't know... I think inspirations are the same as always. After having this album recorded and released now we look back at it from the outside point of view and we can even hear some Led Zeppelin stuff there. So, to point out our influences is kind of hard because it's all there in our subconscious. 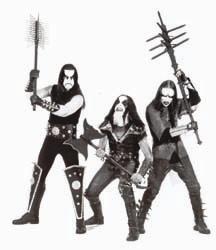 Are the lyrics also kept in this same vein... conquering the world in the name of metal?

Actually, the lyrics don't exactly deal with conquering the metal like Manowar style lyrics, some of them deal with our ancestors and our past from the Viking era but we didn't go totally Viking [laughs] we just tried to match them to the music as well as we could. We just did what we felt was right.

Is Demonaz still working with Immortal? Did he write the lyrics for "Sons of Northern Darkness"?

Yes, he wrote all of them and he also took care of some of the management part of the band. He's very supportive and we still see him as a band member anyway. Even though he can't play at this same level since his injury we are very happy that he still contributes to the band.

How is he feeling now? Is it possible that we'll see him playing guitar in Immortal again?

For years we were hoping that one day he will be back again but we have to be realistic now and it seems like he's not going to be back. He's functioning OK but he just can't play metal at this kind of level anymore because it might get him back to day one of the disease. So, I don't think his comeback will happen anymore but he's doing all right and he's totally happy with his situation in the band. Everything is working fine...

Are you inspired by the new Black Metal scene today, do you listen to any bands from it?

Right now I listen to Carpathian Forest which is like old school black metal, Limbonic Art... what else... In one moment I can put in Venom's "Black Metal" album and then listen to new Dimmu Borgir so, those bands should do as an example of the wide range of styles I listen to in black metal.

I mentioned that your music sounds less and less black metal with every album, does a change of logo also means cutting links with your past?

I think that this album is actually more black metal if it comes to production than "Damned In Black" which is more like a wall of sound. The logo thing, I think that the reason why the band took away the old logo was not because it was too black metal but because of the cover of "At the Heart of Winter". The old logo didn't match the cover and that's why the more readable one was designed, but we still use the old logo on our t-shirts and stuff like that so it's still definitely there. 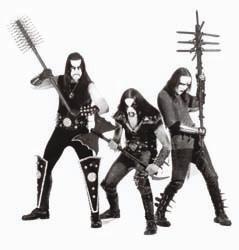 Speaking of it... all of your front covers feature a picture of the band except "At the Heart of Winter"...Why did you decide to adopt a drawing instead of a shot for once?

The band wanted to present themselves as a band but there were just two people at that time and this guy, Fournier came up with this kick ass picture idea that captured the mood of that release. It was just a perfect picture for that album...

But since then everything is back to normal and we have band's pictures featured on the covers again, which by the way are more like a tradition to Immortal fans.

That's how I felt when I joined the band too and I said that we should keep doing it because it's quite exceptional and not too many bands do that. I think that our latest album cover is the best we've done so far and it definitely shows the part of us.

It seems like Peter's Abyss studio has almost become your second home. Did you even consider recording somewhere else?

Yes, of course but we didn't have enough reasons to record somewhere else. He really does a marvelous job for us and he really knows what he wants to do and he does it very well. We go out there and we know how we want to sound but he figures out for us how to make the best quality music out of this sound. Not to mention that he's a dear friend of the band and why change that?

Before we end this interview I was wondering if such a well-known band can live from the music only?

Yes, but it greatly depends on how much we tour. If we have a good year with a lot of tours we can make a living out of it but it's not like we are rich, no way, just enough to put the food on the table, pay bills and that's OK cause we are not really willing to spend 8-9 months on the tour just to make us rich, that is not what we are here for anyway.