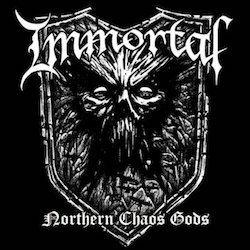 Immortal. A name that tears the silence apart. Northern Chaos Gods. A thunderous promise of another icy load of black metal. So far, so good. However, comeback albums can be pretty ambivalent. Some yesterday's heroes have forgotten their roots, some other are caught in their own past and the most miserable clowns just want to make a quick buck by releasing a collection of lukewarm compositions under the banner of a once great name. Immortal, that's for sure, do not belong to those hordes that are heading for new shores. The album title and especially the song names nearly appear as a parody ("Grim and Dark", Into Battle Ride", "Called to Ice" and so on). But, and that's the crucial thing, they also avoid any form of misery with great ease. Moreover, the album does not lack highlights.

The ultra-aggressive title track sounds like thousands of whiplashes which are combined with the hoarse growling of a bulldog. No doubt, the Battles in the North are raging again and the chorus shines with recognition value, although it does not even possess the smallest form of a melody. "Mighty Ravendark" is the best and most powerful homage to the "Blood Fire Death"-art of Quorthon (R.I.P.) since the invention of Norwegian blackness. I admit that it lies in very close proximity to the title track of the Swedish role model's eponymous work, both in terms of musical approach and aesthetics. Yet even a slavish imitation would add value to the album, as long as it is well done, because Quorthon once set the bar very high. I further admit that this track sends shivers down my spine due to its fascinating vibes that mix triumph and grimness, its epic touch and the dramatic sequences that show up in abundance. The vocals, equipped with a massive reverb, reflect the coldness of the Northern winter landscapes and there can be no doubt that this mid-paced monument honors the imaginary home of the band in a worthy manner. "Gates to Blashyrkh", to give one last example, is a close relative of "Mighty Ravendark", even though it holds a few elements of "Tragedies Blows at Horizon" as well. Its rather relaxed tempo meets somewhat scary riffs and the good flow of the verses is remarkable as well.

Götz Kühnemund, the most popular and maybe most authentic German journalist has recently made an interview with the Norwegian duo. Among other things, Demonaz says that he has the feeling the album can open a new chapter in the history of the band. On the one hand, this is correct, because Immortal are back from the dead and Northern Chaos Gods shows both their unbroken attitude and their instinct for well-designed songs which combine natural forces with clear structures and majestic feelings with sheer insanity. On the other hand, the statement of Demonaz could not be more improper, because Immortal present on the new album nothing but Immortal, Immortal, and, you guessed it, Immortal. They have not changed a iota of their way of proceeding. Honestly speaking, this is exactly what I expected  and any other sound would have been an incalculable risk for the band, their record company (money rules) and last but not least the fans. And even if we were living in a better world without commercial aspects: this is the kind of music that embodies the image of Immortal perfectly. And it is good to know that the metal community does not only have loyal fans, but also some loyal bands.

During the fastest sections, the marginally dull production appears as a blizzard - dense, ice-cold and stormy. During the other parts, the robust and powerful sound creates either a fierce or a gloomy aura. Sometimes I am not sure whether Blashyrkh is still an imagination. It seems as if it has become real over the last 25 years, at least this typical Blahyrhkhian sound. One can discuss whether or not Immortal have a unique status in the black scene, but their lyrical concept has always been unique, maybe slightly infantile at the beginning, but its consistent implementation deserves respect. Enough written. Northern Chaos Gods has everything it needs to reinforce the catalogue of the Scandinavians and, thank God, it has nothing in common with the erratic riffing of their nadir from 1997. It is a monument to themselves and a worthy comeback.

Appendix - thanks to a cold-blooded indiscretion, I already know the track list of their next album (scheduled for 2029):
"Demonaz Winter Battle / Storming Through Blashyrk and Holocaust Winds / Chaos of Northern Sons / Grim and Dark Part II / Drim and Gark Part I (lyrics in Blashyrkian) / Frostbitten, Twice Shy / Icy Ravenrealm Darkness / Kings of the Northern and Even More Northern Mountains".

As much as I appreciate Abbath's performance throughout his existence in Immortal, credit must be bestowed upon Demonaz for rivaling his contribution particularly on At The Heart of Winter and Diabolical Fullmoon Mysticism. I mention those albums because Northern Chaos Gods sounds like a fusion of the two with more of the music throwing strong hints at their 1999 release. Upon receiving information that Immortal was in the process of recording a 2018 release, I was very pessimistic of how it would turn out. Though Demonaz' self titled band did impress me with March of The Norse, having to fulfill the duties of an absent Abbath and still overcome the task of making the album fit within the Immortal catalog would not be easy. I've had at least 3 thorough listening sessions of Northern Chaos Gods and it is with great disbelief that I'm at the point of comparing and ranking it against At The Heart of Winter and following releases. Though not better than the first 3 Immortal offerings in my opinion, they are still highly regarded in the Immortal archive. Demonaz has gone above and beyond with Northern Chaos Gods, he has encapsulated that recognizable Immortal feeling and even go as far as creating an entity that is better than At The Heart of Winter and All Shall Fall.

The music on Northern Chaos Gods immediately institutes the Immortal feeling so many supporters of the band love. This served of great importance where acquiring the trust of the legions is concerned; any diversion from what is expected could easily result in massive backfire and overwhelming negative feedback. As mentioned before, Demonaz is also involved with his solo project and the bigger issue being Abbath is no longer an active member of Immortal thus reinstating the importance of Demonaz' and Horgh's precise and careful undertaking. Preventing the album from echoing a Demonaz project/entry and bearing the burden of competing with Abbath vocally and instrumentally would prove to be two defining factors in the success of Northern Chaos Gods. All this could easily contribute to the demise of this latest release that has so much pressure leaning against it.

Speed is the primary focus of the opening moments on Northern Chaos Gods. No problem here; Horgh brings a blistering blast beat barrage that firmly affixes the staple blueprint of Immortal's aggressive technique. A moment is taken to paint the atmosphere and build the landscapes via "Gates to Blashyrkh". Once the pillars had fallen into their rightful places, the Immortal identity revealed itself whole-fully to the listener. During the time spent listening to the first half of the record, similarities amongst All Shall Fall, At the Heart of Winter and Diabolical Fullmoon Mysticism presented themselves in an entwined manner. Some entries sound like a collaboration of past Immortal songs such as, "Where Dark and Light Don't Differ", "The Call of The Wintermoon" and "Tragedies Blows At Horizon". Given its Summer at the time of listening to Northern Chaos Gods, the atmosphere emerging from the album is so strong that Winter felt ever so near and imminent; as though Autumn was approaching its departure. Vocally, Demonaz sounds like an undertone blend of Abbath on Immortal's 1992 debut full length release, Diabolical Fullmoon Mysticism and arguably their most critically acclaimed album At The Heart of Winter. His guitar and vocal skills matched with Horgh's ability to blast away and to play along to mid tempo and mid paced sections with efficacy that licensed a resolute and comprehensive addition to the Immortal inventory. The sound quality on the album echoes At The Heart of Winter but with slightly improved clarity and a meaty bass tone. This production worked well and definitely finalized the output positively.

Northern Chaos Gods is certainly an album that can stand firmly amongst the best albums Immortal have accumulated. It will be a highly debatable album in terms of musical supremacy amongst metal critics, enthusiast and regular fans of the genre and band.