Dornenreich are a peculiar entity; riddled with peculiar German lyrics that seem to transcend the barriers of each human emotion whilst taking the listener on a journey of thought about the existence of ourselves. All this from a band that many uneducated minds would deem a common form of black metal. Dornenreich are clearly far, far more. I try to delve deeply into one of Dornenreich’s lyrical mechanics. Through a tumultuous tornado discussing Dornenreich’s English capabilities, Hexenwind and forthcoming albums, Dornenreich’s Eviga has much to offer… 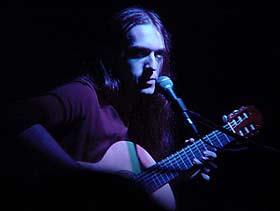 First off I would like to thank you Eviga for taking the time out to answer these few questions for Metalbite.com. Could you please tell me how you came together to form Dornenreich and perhaps a bit of background information?

Established in winter 1995 by Valnes, I joined the band in summer 1996 and finally our first line-up was completed by Gilvan in April 1997. Then, in May we released our only demo entitled "Mein Flügelschlag" ("The Beat Of My Wings"), which opened us the door to CCP-Records in July 1997. Well, Valnes and me were sixteen years young yet, the songs we had composed for our debut were ripe and all we wanted to do was record them in a studio as soon as possible. We signed the contract and entered the studio in September 1997. Finally, our debut-album "Nicht um zu sterben" ("Not In Order To Die") was released in January 1998. We received very enthusiastic reviews and great reactions throughout the entire world and after the release of our second album "Bitter ist's dem Tod zu dienen" ("Bitter it is - Serving Death") numerous people seemed to be overwhelmed, indeed. Some appreciated our musical skills, our various individuality and our extraordinarily high level of intensity. But despite of all the encouraging reactions CCP rather failed in promotion and distribution, therefore we made tracks for a label that truthfully appreciates our expressions and emphasizes both quality as well as credible authenticity. After all we found these characteristics in the label-conviction of the German Prophecy Productions - for the people behind Prophecy devote themselves to their ideas and beliefs idealistically and continuously.

Naturally "Her Von Welken Nächten" ("From Faded Nights") would sound different if we would record the album over again these days, because we have developed ourselves further of course. However we are proud and we will stay proud of it for the rest of our lives, because we know that we dedicated everything we had to that album; we had an inner vision and we tried our best to create it as similar to this inner vision as possible at the price of total physical and psychic exhaustion.

Now I'm going to be a real pain in the ass by asking this, but could you tell me what each of the 9 songs on "Her Von Welken Nächten" means?

In fact it's impossible to translate every single title literally for my lyrics are based on a rather individual use of German grammar and even vocabulary, but you asked for it, so I'll try my best, however I will leave it up to you to get yourself a rhyme on its sometimes truly ambiguous meanings...

Starting of with the opening song 'Eigenwach' I would say that one might put it like 'Awaken To One's Inner Individuality', for the second song 'Ich Bin Aus Mir' it could be 'I Am (consist/am built) Of Me', then there's the third song 'Wer Hat Angst Vor Einsamkeit?' - possibly 'Who Is Afraid Of Solitude?', furthermore the fourth one 'Grell Und Dunkel Strömt Das Leben' could mean something nearly to 'Life Streams Dazzling And Dark', the fifth title 'Innerwille Ist Mein Docht' might be translated as 'Inner Will Is My Wicked', moreover the sixth song 'Hier Weht Ein Moment' could mean 'Here Waves A Moment', the seventh song 'Schwarz Schaut Tiefsten Lichterglanz' possibly 'Black Sees The Deepest Glimmer Of Lights', the eighth title 'Trauerbrandung' approximately 'Surge Of Sorrow' and finally the song 'Mein Publikum - Der Augenblick' is to mean 'My Audience - The Moment'.

Well, it is really hard to put the hidden puns and various meanings of the original version into another language, especially when this language does differ in the use of grammar - like English does in this very case. Thus I can only hope that you get a vague idea at least. By the way, I am quite sure that the English translation lacks the poetic and aesthetic appeal of the original totally, so... 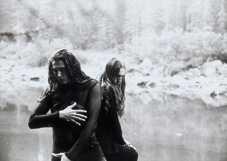 In the booklet for "Her Von Welken Nächten" it lists Dornenreich as being as three member band; you on vocals, guitars and bass, Valnes on vocals and synthesizers as well as Gilvan on drums and percussion, yet on the Prophecy Productions website (www.prophecyproductions.de) Dornenreich is specified as just you and Valnes. Will Dornenreich likely include Gilvan as a third member for other albums or is he more of a session musician for Dornenreich?

That refers back to a rather sad chapter of the band-history, for Gilvan left Dornenreich last summer due to personal reasons, which Valnes and me can't fully understand in turn, but what are we to do? Well, we have to continue our journey without him. Doubtlessly we had a difficult period back then, but recently we have found a session-drummer, who will play this year's summer-festivals with us and who will support our forth-coming recordings with Dornenreich and Hexenwind too.

Chaos; it is the one word that I can visualise to correctly sum up what I think when I hear Dornenreich. Your music has so much going at once, so many ideas incorporated into the one song...it clearly does become chaotic at times for the listener. But I guess that is a sort of trademark of Dornenreich, to jump from quieter acoustic sections to bombastic heavy guitars and obliterating vocals.

I would put it the following way myself: we tend to burst with ideas (fortunately!). Actually we try to get across numerous moments of varied passion, that is, we intend to do justice to the variety and the contrasts of human emotions, moods and perceptions. We primarily focus on a three-dimensional and thus truly alive expression within the harmony of music, words and visual appearance.

Obviously you feel very at home writing in German as you are able to express yourself better and more sincerely, but is there any possible chance of you doing an English album so people that are not German speaking can understand (like me)?

Possibly I will start English studies at the local university in autumn, consequently I would grow familiar with this language by and by. Then, I would be introduced to all the details, puns and grammatical nuances that are indispensable when trying to write individual and personal lyrics, which has always been incredibly important to me. Apart from that we plan to record a cover-version of Tori Amos' song 'Little Earthquakes' for the fourth Dornenreich album and we are keen on elaborating at least English summaries of our upcoming lyrics in order to include them in the booklets.

Whilst many bands in your former field (that being a variation of black metal) sing about Satan and other silly lyrics, you guys deal with a slightly different form of subject[s]. Could you elaborate about the lyrics that Dornenreich writes?

Basically my lyrics deal with archaic and profound topics such as transitoriness, emotional raggedness, intuition, the balance between reality and dream and will-power to name only a few, because I consider them to be timeless and Omni-relevant for every single human being. Thus these contents affect even my own inner source of existence which enables my special level of delivering my soul through my voice as intensive as it gets at the edge of total physical and psychic exhaustion.

Does Dornenreich get into the whole metal scene much or do you prefer to operate at a distance to all the confines and cliches that metal can often contain with all its cursed genres and labeling of bands? I am guessing you don't so much, as with your signing with Prophecy Productions who support innovation and individuality from their musicians.

You are absolutely right. We are definitely tired of all those categories, cliches and reductions. So Dornenreich and Hexenwind stand out for independent artistic passion far off the stumbling masses.

What do you listen to music wise? What would your top 3 records be at the moment?

As one will probably guess when listening to our music we are really into many different artists, ensembles and bands. We deal with everything that moves us emotionally or saves us from daily-routine superficiality - regardless of any borders of genres. We appreciate authentic and thus credible expressions of black metal, avantgarde, ethno-music, northern folklore over pop, ambient, ritual to classical Music, however it has to be organic, original and intensive. At the moment I'm totally crazy for a band called Notre Dame, which I think is one of the most underrated ensembles of artists at all. I honestly love their unique charisma.

Is there any CDs you are looking forward to this year Eviga? Personally I can't wait for the new Arcturus album; 'The Sham Mirrors' and Thyrfing's 'The Fourth Outrage'.

Nowadays most new releases disappoint me, for they often lack passion and uniqueness, nevertheless I'm anxious about the upcoming albums of The Kovenant, Arcturus and the next full-length album of Notre Dame. 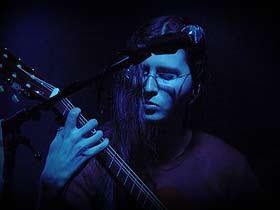 Are you still going ahead with the Dornenreich home video? Is it just going to be VHS or you going to go DVD with it too?

Just yesterday, during a Garmana concert we met a guy who offered us the possibility to cut the first scenes, though I have to admit that we would rather shoot a Hexenwind video this year, because we are full of ideas for that band. So, let's see what will happen...

Are we going to see Dornenreich album number 4 released in 2002?

We plan to start the recordings in summer, but with Dornenreich we will take our time to develop the conception and I think that the album won't be released before winter 2003. Anyway we have already composed material for four CDs.

Primarily I speak of the forthcoming Hexenwind double-album, which will be released in winter 2002/2003. Besides there is existing a project album for which Valnes wrote lyrics in English and which will feature my guitar-playing exclusively. I in turn have already finished four new Dornenreich songs, which of course will differ from our previous album, for we have in mind many artistic visions. By the way, I will also record vocal parts for the next Angizia album which will be some kind of a cynical, grotesque and even bizarre radio-play. And apart from all those studio-activities we, as I've mentioned above will play at the two biggest German summer festivals, namely the With Full Force Open Air headlining Slayer and the Wacken Open Air headlining Blind Guardian, which will be quite a challenge for Dornenreich.

I would like to give you a big thank you for this great and informative interview Eviga, and truly do look forward to any new musical outputs your creative mind comes out with. Do you have any final words or such?

Well, to come to an end I would like to thank you for your honest interest and support, it has been an honour to do this interview.