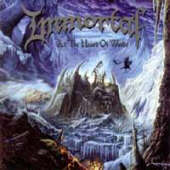 One look into the album insert of Immortal’s “At The Heart of Winter” and you won’t be surprised that Immortal is still attached to their roots and they’re proudly clad their black and white corpsepaint. You just might be under the impression that after four full-length albums of hyper-speed black metal, that because nothing on the outside indicates the band has changed, they’re still playing that same cacophonous wall of noise. One listen to the album though reveals that Immortal is a new band, and the best that they’ve been at that.

Sure Immortal has slowed things down substantially, but speed still is an element, and the rest of those important factors of the past are still here. The change could be do to previous guitarist Demonaz suffering from acute tendonitis in one of his playing hands, and the duties being taken over by Abbath. I can’t help but say this is one of the better things to happen in metal, as “At The Heart of Winter” is one of the better black metal releases out there.

From a musical standpoint, “At The Heart of Winter” is less loud and indecipherable than previously. The riffs themselves have a distinct relationship with death metal because of their somewhat technical aspect. It’s readily apparent that everything is tied to black metal though. Melody is heavily pushed to the front Abbath’s mind, shown in all of the songs. What truly caught my attention at first was the clean guitar in the middle of ‘Tragedies Blows At Horizon’, including some amazing riffs packed in that song also. That’s not to say that anything before that track was any less appealing. It’s hard to stand by and say that ‘Withstand The Fall of Time’ didn’t get my head banging with it’s fast tempo, or that ‘Solarfall’ was any weaker. Moving on, ‘Where Dark and Light Don’t Differ’ has moments that make you realize that “At The Heart of Winter” is surprisingly epic in sound without anything being overdone, over-layered, or cheesy. Possibly the best song is yet to come though, as the title track exhibits each and every element before. Immortal refuse to close on a weak note, and ‘Years of Silent Sorrow’ puts an end to what is soon to be repeated.

My biggest gripe about “At The Heart of Winter” is the arrangements. It happens that the length of these songs is due some sections being repeated a bit too much for their own good. If you’re not absolutely in the mood, it can make it seem like the song was started over or is being played twice. This isn’t something that’s intolerable to any extent, but it can create a problem depending on what mood your in. With that said, I must say that further into the song you’re usually introduced to something new that fits in with the song excellently and leaves you with the feeling that the songs are leading you somewhere.

Bottom Line: Not a weak track is to be found on “At The Heart of Winter”. It’s a new beginning for Immortal, and an essential album for fans of black metal.