Aeternus - this name should ring a bell to most fans of extreme metal. Through the years of their Dark metal career they've served us with heavy and powerful hymns, brutal lyrics and their trademark dark atmosphere build upon slow classical guitar passages. Their latest release "Ascension Of Terror" shows a slightly different side: shorter, more aggressive and faster Death style sounding tracks that have only one purpose; level everything in its path. This interview was conducted almost two months ago but for some mysterious (or 'dark' if you prefer) reasons I just got my answers, and Ares straightens me up on some of my vision problems and explains all the personal and musical changes since their last release.

First of all I'd like to congratulate you on a brilliant piece of work "Ascension of Terror", but what took you so long to release it? It was definitely worth the wait but the material was written last summer.

Allot of delays occurred and we couldn't control any of it. Basically it all came from HHR, but some were on our shoulders as well. Yes, I wrote these songs a loooong time ago, when it came out in Europe this November, it really felt strange as we're way into the new material already.

A few months ago Morrigan left the band and was replaced by V'gandr. How did you find him and is he a permanent band member by now or still with a status of permanent session member?

V'gandr gas a status as a permanent session member, this means that he's there for us as long as he has the time. We didn't actually "find" him; he was the first and best choice for us. He's good at playing and we've seen him live with his own band and were mostly interested in someone who believes in the aggressive way of performing Metal on stage. Aeternus puts allot of weight on that so...

You also have a new guitarist Radek. Can you give us a little background on how did you get him, where did he play before.?

He never really played anywhere, we never really knew him that good either. The thing was that we were tired of having a session guitarist on every damn tour so it was time to get a person who would be with us at all times, doing guitar on tours and at the end, of course, give of himself to the band in the shape of lyrics, music and so forth. When we learned that he played guitar, we asked him if he was interested and he was very, very interested as he was actually a huge fan of Aeternus.

Did Radek have any input, was he involved in a writing process of the new material or he's role for now is just to play what you give it to him?

As far as "Ascension..." he was involved in nothing, but certain arrangements on 'The Lair of Anubis', the last song on that album. I am still the composer of the Aeternus material, but it doesn't mean he can't make stuff for the band.

Even though there are four of you now, the cover is missing Radek (what the hell was I smoking, I meant V'gandr and it turned out to be Morrigan anyway) as a 'source of terror'. Didn't he make the photo shots with the rest of the band?

Hehehehe, Radek is actually on the cover my friend. It's Morrigan who isn't there!
The reason for this was that her interest and time didn't fit with ours and since she had quit the band, we decided to go on ahead without her. 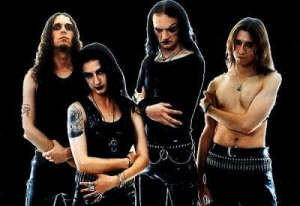 Did lack of Morrigan in any way affect the composing process of the new material?

Aeternus is functioning 100% without her; the only thing I miss sometimes is her great lyrics. They really inspired me and they are all great. Erik and me mixed "Ascension..." alone with Pytten, our Producer and that went just fine. At times I remember that we felt that her opinion could solve problems, but we managed just fine. Morrigan has a strong musical insight and great ideas so not having her there felt weird, but not in any way where we felt that she should have been there.

Your new material differs from your previous releases, is it a natural progression of the band or did you want to do something different and whole process was calculated from the start?

What we wanted with "Ascension..." was to increase the brutal atmospheres within the music by using Death Metal elements in the songs, mixed with the typical Aeternus riffs. This worked out really great and we also got songs that sounded really interesting, looking at them as Death Metal songs. Not typical Death Metal, but something more and melodic. People have told me exactly this and they look upon it all as very interesting as well... Now, allot of people missed the folk elements and acoustic parts, but this was too unsuitable for what we were headed for so we left those aspects out. Our new material contains more "good old" Aeternus riffs and we'll have some folk elements and acoustic guitars on the next album along with some Aeternus elements which people can recognize as Aeternus and nothing else.

Although typical Aeternus dark elements are still preserved, the new album shows much more death metal influences in it. Is this the direction you want to go?

We don't want to go this direction at all. This is stuff we did for "Ascension of Terror" and that's that. However, there are some of these elements on the new material, but that's only natural. I'm trying not to do too much of this, I'm really into the "New thinking" right now and that takes allot of time and hours of playing/practicing and not at least composing.

What happened to your signature classic guitar parts? Are you going to include them on your future albums?

Yes, this I kinda answered on the above answer.... I still really lay the sound of acoustic guitars and I feel it should still be a part of Aeternus and so forth. On "Ascension..." it was simply unsuitable.

Your songs got also much shorter which in my opinion are easier to get into but at this same time more powerful. What was the main difference during this writing session that caused so many differences from your previous releases?

We just wanted to change in different ways you know? It was important not to completely "Take Off" and I don't feel we did. Having shorter songs was natural due to the Death-feel most of them had yes? Powerful and more in the face, yes, that's another thing we wanted with this album. Something that really hit you hard without you understanding what hit you before putting the album on a couple of times you know?

If that's not enough changes you've also lost the corpse paint and Erik goes under his own name instead of Vrolok. Did you get tired of all those black metal comparisons and decided to end it once and for all?

Yes! That's exactly what happened. Erik chose to go by his real name as Vrolok didn't appeal to him in any way any longer and I think that's great because I personally feel that one shouldn't have an "artist-name" unless it means something to you.

Are you or any members of Aeternus still involved in any side projects? I know V'gander has Helheim, you have Corona Borealis...

Right now, I don't have anything, I'm glad though as I have no time these days for something more than Aeternus when it comes to music. Yes, V'gandr has Helheim, so far there has been no complications with him helping us and so forth.

Since "Ascension of Terror" was written over a year ago I bet there is a new material already written for the new album. If so, what can we expect?

Allot of brutal shit of course, but also stuff we haven't done before. We'll try to do some things that one can't really relate too much to Aeternus. This is hard and I'm not sure if we're doing it now, but we'll see... We have to move on as time goes on yes? The challenge is to sound like Aeternus and still be original and make music that gives a feel of something new.
So, we'll see...

What is the promotion plan for the "Ascension of Terror"? How's the touring schedule look like? Any plans to visit the States?

No, USA is not among the tour plans; it's not easy to get things done over there. We'll tour in Europe in March to promote "Ascension of Terror". So far it seems like it's going to be almost a month of touring and that's good.

Speaking of promotion, are you satisfied with the work Hammerheart has done for you so far?

They've done allot of great things for us and they have done some shitty things too. It's like this with all labels and we've been a pain in the ass too, I'm sure. One can't agree on every damn thing in this world so...

Well, Stay Metal and be good!